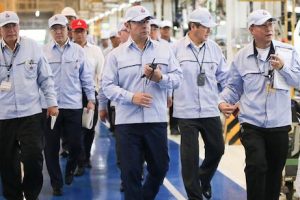 Mitsubishi Motors has become the largest vehicle exporter in Thailand for the first time, according to results for the year ending March 31st.

The carmaker’s total export volume during the year was 309,915. The Laem Chabang factory – one of four plants it has in Thailand – exported more than 80% of its production.

Mitsubishi’s total output in the country reached 356,000 vehicles, including units of the Mirage, Mirage G4, Lancer, Strada and Montero Sport. Installed capacity across its plants means it could add a further 60,000 units annually to its assembly lines.

The carmaker exports to 120 countries from Thailand. Its three largest export markets are Europe (28%), the ASEAN and Asia region (25%) and North America (21%).

Speaking about the Laem Chabang factory during his visit there this week, Carlos Ghosn, CEO and chairman of Renault and chairman of Mitsubishi Motors since last December, said: “Our world-class production facilities are capable of producing 424,000 vehicles a year. As Thailand's leading automotive exporter, this factory has become the global production hub for Mitsubishi Motors."

In a statement, Mitsubishi said its growth would be supported by better procurement, improved logistics, better plant utilisation, and access to technology sharing and common vehicle platforms.