Mitsubishi to end US production, switch to exports from Japan 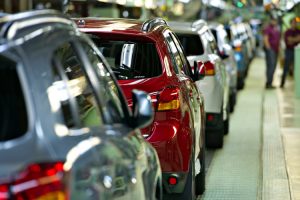 Mitsubishi Motors is ending production of its Outlander Sport model in the US by November this year. The carmaker’s division there – Mitsubishi Motors North America (MMNA) – makes the vehicle at its only plant in the country, located at Normal, Illinois. Production is now expected to switch to its Japanese plant in Okazaki, subject to a final board decision, which is expected on July 30th, from which it will be exported to North America.

“Normal will continue to build the Outlander Sport until the end of November 2015,” a spokesperson for the carmaker confirmed, adding that while it did not have an exact timing for when Japan-built Outlander Sports would begin arriving in the US, it was likely to be in the first quarter of 2016. “We will most likely be using the same port of entries that we currently use,” he said.

Mitsubishi currently imports through the ports of Hueneme, California and Tacoma, Washington on the west coast, and Baltimore, Maryland and Jacksonville, Florida on the east coast. Exports from Japan are handled at the ports of Nagoya and Mizushima.

The factory is currently the only Japanese automotive assembly plant in the US to be represented by the United Auto Workers (UAW) union. Mitsubishi Motors has said it will work with the UAW to find a buyer for the Normal plant in the interest of maintaining production and jobs.

Economies of scale
Mitsubishi originally established the Normal plant as a joint venture with Chrysler in 1988 called Diamond Star Motors until Mitsubishi bought all the shares in 1991 and became MMNA; however, the plant continued to supply Chrysler until 2005.

While sales of the Outlander have been increasing in the US and output from the plant has been growing in recent years, the MMNA plant is nowhere near the full annual volume of 222,000 units it was back in 2000. The combination of the end of Chrysler supply contract and the impact of the economic downturn, saw volume production bottom out at 18,500 in 2009. That had recovered to 69,000 last year, while production in the first six months of 2015 was more than 33,000 – up 23% in the same period last year according to the Automotive News data centre. Nevertheless, Mitsubishi said it’s production scale was still low compared to other North American assembly plants.

Negative factors in international markets have also led Mitsubishi to review its production in the US. Since 2012 production at the Normal plant was also aimed at supplying regions abroad, including Russia, the Middle East and Latin America, which was intended in part to use available capacity and to avoid the then-strong Japanese yen. Russia accounted for 30% of the output but the crisis in that market, which is down by around 40% this year, has taken its toll on the US plant, according to the carmaker.

In the US however, sales figures are up and the company said it was keen to remain a competitor in the North American market. Total US vehicle sales for MMNA for 2014 were 77,643 units, marking a 24.8% sales increase over 2013, including a 24.5% increase from 2013 for the Outlander Sport based on the previous year, equal to more than 31,000 units. The carmaker currently imports the Outlander, Lancer, Mirage and i-MiEV to the US, which represented combined sales last year of 46,589 vehicles.

Sales to date in the US are up a further 25% compared to last year at 49,500, according to the Automotive News data centre. The numbers are nevertheless also well off the carmaker’s peak sales of 345,000 units in the US in the early 2000s, with the bulk of its sales and production now focused in South-East Asia.

Factors such as import costs to the Netherlands for the parts and knockdown kits used to assemble the Outlander, as well as the lower wage ranges in Thailand against those paid in the Netherlands, all played their part in the decision to end production.

VDL Groep subsequently bought the Nedcar plant from Mitsubishi and converted it for contract production of Mini models as part of a deal with BMW.

Worker concerns
Around 1,250 workers are employed at the Normal plant, with 400 more employed as part of the MMNA company. Mitsubishi said that it expects to find a buyer to take over the plant given the strength of sales in the US.

"This difficult decision follows years of challenge to remain viable, and was compelled by the combination of insufficient US sales and low production capacity utilisation,” said Hiroshi Harunari, executive vice-president in charge of overseas operations for Mitsubishi Motors. “We greatly value the work of all of our employees in Normal and want to stress that our motivation to exit from this facility is unrelated to labour costs or our relationship with the UAW. Our partnership over the years has been both respectful and mutually beneficial. Our primary focus right now is to work together to identify a strategic buyer for the plant in order to transit into next phase.”