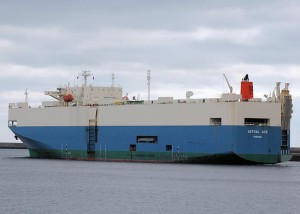 The crew of a Mitsui O.S.K. Lines (MOL) car carrier has rescued five fishermen found drifting near the Malay Peninsula in the South China Sea.

The Astral Ace was on route from the port of Singapore to Laem Chabang port in Thailand on Sunday (1 February) when it spotted the fishermen – two Malaysians and three Indonesians – who were in distress in their half sunken boat. They were rescued within an hour and turned over to the Malaysian Maritime Rescue Coordination Centre the same day.

The vessel is now at Laem Chabang port.

The latest incident follows a similar rescue in October last year when the crew of an MOL-operated LNG carrier – Senshu Maru – rescued three Indonesian fishermen found drifting in the Celebes Sea of the coast of Indonesia after their boat had been sunk by a large wave.