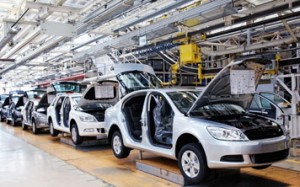 Vehicle production in Nigeria is gaining momentum. In the last month both Volkswagen and Honda have started production in the country, and Tata Motors has announced plans to invest $8m in a joint venture plant with local company Iron Product Industries, for vehicle production.[sam_ad id=6 codes='true']

The latest announcements follow Nissan’s decision last year to start production at the joint venture plant the Renault-Nissan Alliance has with West African conglomerate Stallion Group, in the capital, Lagos.

Interest by foreign carmakers has been growing since the introduction by the Nigerian government of a new automotive industry development plan late in 2013. The National Automotive Industry Development Plan (NAIDP) is aimed at establishing a domestic automotive sector by offering companies incentives for local production. These include the removal of tariffs on complete knockdown (CKD) kits imported for domestic assembly. The NAIDP also grants ‘Pioneer Status’ for qualifying carmakers, which affords a five-year tax break for those setting up anywhere in the country and a tax reduction of 20% on investments in infrastructure, including roads.

Another driver for local production in Nigeria is the fact that there is a 70% fee on all imported passenger vehicles.

Volkswagen, which has not built cars in the country for 25 years, started production on July 7th and plans to include the Passat, Jetta and CC sedans, as well as the Amarok pickup truck. The German carmaker also has a venture with Stallion Group at its plant near Lagos.

Stallion is VW’s preferred partner for distribution in Nigeria and handles VW Group brands, as well as Audi, Skoda and Porsche.

“Stallion is committed to investing and expanding further its operations in the automotive value chain across multiple global brands, paving the way for Nigeria to establish itself as a regional leader in the automobile eco system,” said the company’s chairman, Sunil Vaswani.

As well as Nissan and VW, Stallion is assembling vehicles for Ashok Leyland, Hyundai and Iveco.

The company began importing Honda vehicles to Nigeria in 2013 when it set up the local subsidiary.

“Establishment of the first Honda automobile production plant in Africa is an epoch-making challenge for us,” said Yoshi Yamane, senior managing officer and director, Honda Motor. “This production operation incorporates know-how Honda has amassed through its long history of motorcycle business in this market, and we could re-discover the strengths of Honda at the spot of manufacturing operations. I expect that this initiative will lead to a great leap in our automobile business in Nigeria and become a first step toward expansion to the entire African market.”

More than 30 OEMs are reported to have set up production in the country since the government development plan was put in place.