More sparks are set to fly 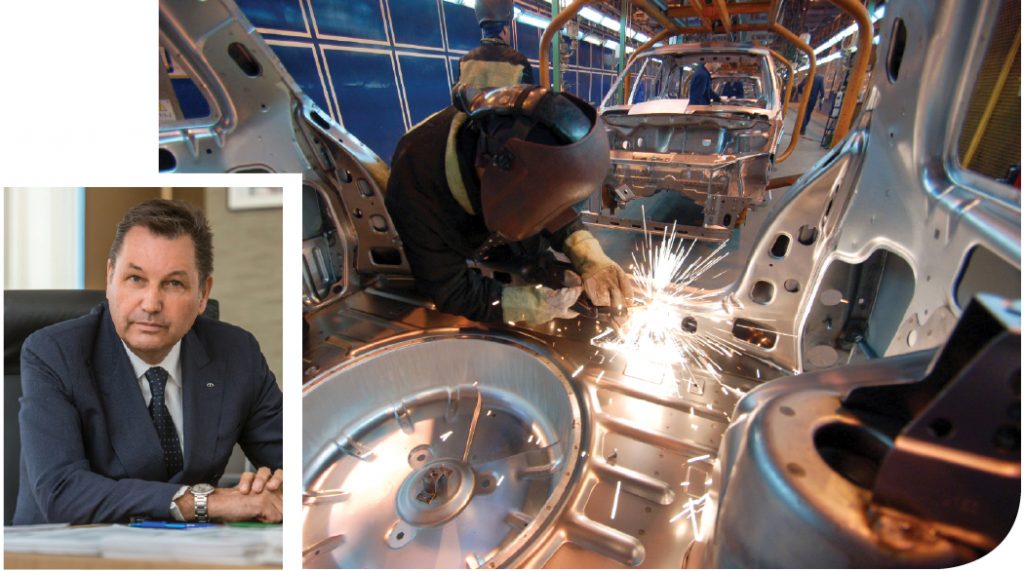 Despite being on somewhat familiar ground, Russia’s political climate and the status of the Lada brand call for Bo Andersson (pictured) to tread carefully while better aligning supply and demand at Avtovaz. Roger Stansfield reports

Since leaving General Motors as its global purchasing and supply chain chief, Bo Andersson has developed quite a reputation as a turnaround expert for Russian manufacturers. When he took over as president of the Gaz Group in 2009, the company was losing about $1 billion per year. Within two years he drastically restructured the OEM and helped return it to profitability.

While it was a transformation built on many decisions – from cutting staff and unprofitable models to gaining contract manufacturing deals – a radical shift in the Russian commercial vehicle manufacturer’s supply chain management and logistics was also essential. Andersson, who was known for his penchant for logistics and purchasing efficiency at GM, introduced a customer-order based production system at Gaz, slashed inventory at warehouses and assembly plants, sourced more competitive parts outside Russia and helped introduce internal milkrun supplier deliveries around its plants (read more here).

Since taking over as chief executive officer earlier this year at Renault Nissan-controlled Avtovaz, Russia’s largest carmaker, Andersson has started all over again on a bigger scale. A better alignment of production and supply to demand will be a huge part of the task. With Russian new car sales expected to be down by around 15% this year compared to 2013 and Avtovaz’s main brand, Lada, faring worse than average, Andersson has started a process that will trim the workforce by 13,000 to 53,000 before 2015. He has also taken 75,000 cars out of the production schedule in response to falling sales.

Supply chain management will be one of the most critical parts of the turnaround. Andersson and his management team are following their own playbook by switching Avtovaz to a ‘built-to-order’ production process, which is expected to help drive down material and vehicle inventory. Avtovaz’s supply chain executives are also working more closely with those at the Renault Nissan Alliance to help share common parts and logistics routes, as well as to increase contract and purchasing transparency. While the carmaker is modernising its assembly lines and productivity targets, logistics processes are getting the same treatment. There is a push for more milkruns and better transport efficiency, for example.

Within days of taking control at Avtovaz, Andersson began to reduce the top-heavy tiers of management and re-organise the company’s main plant at Togliatti, reducing 18 layers of management to just five. However, even while Andersson will have eliminated 35% of non-productive white-collar staff by the year’s end, he has strengthened logistics management, with each plant manager now having someone in charge of logistics.

Although some of the changes are clear, the painful decisions on waste and labour are not easy in Russia’s political climate. Chief financial officer Eugeny Belinin, who followed Andersson from Gaz to Avtovaz, says 80% of the issues are the same as they faced while at Gaz, but they had a freer hand at that company. “There was not the same attention from the president [Vladimir Putin] and the government. Here it is more political. Lada is a symbolic company for Russia,” he says.

Andersson insists there is no mystique to his management style and philosophy. “I break everything down into small pieces and then I give simple instructions,” he says. “We give tasks to everyone by name and set them targets. Every day we measure the percentage fulfilment.”

He began to reshape Togliatti by “breaking the plant into 11 pieces”. Every morning at 6.45 he meets 100 people from all levels of the company on the shop floor for a three-minute report on all aspects of production performance. “We are now building 2,700 vehicles a day at 30% better cost and 25% better quality,” he says. 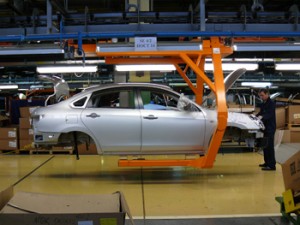 There are five production lines at the vast Togliatti complex, but two are responsible for around 65% of the plant’s output. The B0 line builds the Lada Largus saloon and light van, plus the Renault Logan and Sandero (which are Dacia brands in most markets outside Russia) and Nissan’s Almera, on a three-shift system at the rate of 47 cars an hour. Production is being ramped up towards 55 an hour thanks to the requirements of Renault and Nissan. “This year we will build 150,000 vehicles for the Alliance; 22% of our production,” says Andersson.

The Kalina line makes the Lada Kalina, the Lada Granta – Russia’s best-selling car –and, since earlier this year, the Datsun on-Do, which is based on the Granta. That makes Togliatti the only plant within the Alliance globally to produce cars for four brands.

three shifts to two. Both lines are almost fully integrated into the ‘Alliance Production Way’, though local anomalies from the old Lada days remain, like the bumper delivery system to the B0 line.

Since last year, Avtovaz has been part of the Alliance Purchasing System and Togliatti is absorbing other group practices in operations and logistics. “The trick is to say where do we have unique parts and where do we have common parts?” Andersson says.

Although Avtovaz executives are not commenting directly on it, there is also likely to be scope for Lada’s logistics management to be further integrated with Alliance Logistics Europe, the logistics purchasing and operations division for Renault and Nissan. Logistics for Renault and Nissan models built at the plant are already combined with the two carmakers’ Russian production and supply chain.

Andersson’s focus has been on taking cost out of Avtovaz’s operations, including raising productivity and reducing material and vehicle inventory. “In January we had 60 days’ inventory, which sent out the wrong message. Dealers want cars they can sell. Today it is 47 days and in a month it will be less than 40,” he says. “From the first of September we are working 100% to customer orders [the pull system of manufacturing] because we have to get competitive. We have reduced raw material stocks from 45 days to 12 days and introduced 30-day payment terms for dealers. It was 60 days.”

Even before the switch to order-driven production, the carmaker was consolidating its warehousing space. “We had 230,000 sq.ft (21,400 sq.m) of warehouses. Now it is 100,000 sq.ft,” says Andersson. “Steel warehousing has been reduced to zero. We are now doing milkruns, so there will be no storage by the end of the year.”

Andersson adds that the company is looking for Rb11 billion ($295m) in cost reduction and RUB 6 billion in revenue enhancements, for a combined Rb17 billion improvement. “We have already delivered 11 out of those Rb17 billion,” he says.

Alliance best practices are now used as a measuring tool for suppliers, who account for Rb140 billion of the company’s Rb250 billion turnover. “We have a global supply base which includes local companies, joint ventures and multi-nationals based in Russia and look at the best benefits for ourselves and our suppliers,” says Andersson. 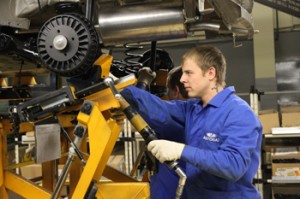 The company’s top five strategic groups account for 28% of its purchasing spend, and while Andersson is pleased with the progress of some suppliers, he is “very disappointed” with others. For example, 40% of the company’s suppliers had been responsible for 50 days of stock because of their unreliability.

Problems with quality and delivery are not limited to suppliers based in Russia. “I get two train sets of supplies per week from Romania, which must be improved,” says Andersson. “I expect perfect delivery, quality, service and price, and there is a lot of work to be done.”

Unproductive facilities and assets are either being sold off or closed to raise finance and cut energy use. The last vestiges of the Soviet-era ‘job for life’ mentality are disappearing and staff now understand the company has to make a profit.

“Last year productivity was 20 cars per person per year,” says Andersson. “This year it will be 40, but to be competitive we need 60.”

Supply chain quality is also being raised through a new Field Quality Information Centre, which allows customers or dealers to report faults directly. If the problem is serious enough the part can be brought in and analysed, and the line section or supplier informed for remedial action or containment – all within 24 hours. The number of wrong or missing parts has already been cut from 3.1% to 0.1%, says Andersson, while the proportion of cars delivered to dealers with damage is down to 2.4%.

Executive vice-president Hugues Desmarchelier, in charge of production at Togliatti, is enthusiastic over the changes, especially the Alliance operating systems. “We are developing better logistics with suppliers,” he says “We now collect from different suppliers where before they delivered. Often the truck would not be full, so that led to overstocking.”

Although he sees further room for improvement, Desmarchelier points out that the company has already been able to reduce internal stocks at the plant from 20 days to fewer than ten. It is now arranging more direct deliveries, which helps to avoid double stocking. “Most important of all, we are using the Alliance system to start to build to order. That improves our outbound logistics. We have never done this before,” he says.

"From the first of September we are working 100% to customer orders... We have reduced raw material stocks from 45 days to 12 days and introduced 30-day payment terms for dealers. It was 60 days" - Bo Andersson, AvtovazLada plans to add ten new models in five years – an unprecedented launch plan for the company – and is targeting a 20% share of the Russian market against today’s 16.5%; it wants to increase output to 1m vehicles a year at a 10% operating margin as soon as possible. CFO Belinin insists that none of the planned investments are at risk from the downturn in the Russian market. “We have confirmation that five of our biggest eight projects will be financed,” he says. “But we are improving our controls.” 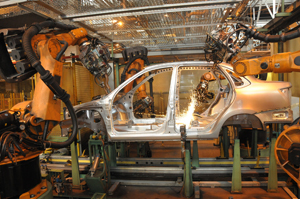 Andersson says that the B0 and Kalina lines are now producing cars of European quality, and that the right new models are coming along. Purchasing and supply chain management will be important as the company aims to increase its quality and reputation.

“We have good workers, good specialists and good management,” says Andersson. “We can be world class. We are not world class today, and if you don’t have the right vehicles, the right purchasing, the right organisation and the right quality, you can’t do it.”