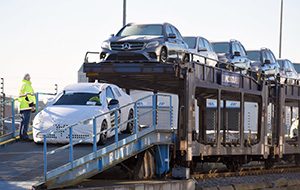 After a five-year break, German multimodal vehicle logistics provider Mosolf has reactivated a regular railway service from Kippenheim to Düsseldorf.

The decision should remove a significant portion of cars currently transported by road between the two.

Inland waterway vessels account for the greatest percentage of these, at 49% of the total. In future, 17% (12,000) of cars on the route will be moved by rail, with trucks handling the remaining 34%.

A local transport fleet, currently made up of 40 vehicle transporters, will pick up vehicles destined for local dealerships from Düsseldorf for final-mile delivery.

Wolfgang Göbel, chief sales officer at Mosolf said: “In addition to the environmental benefits of rail services compared to trucks – a block train with 250 cars is roughly the equivalent of 35 truckloads, depending on the load factor – the concept also makes sense from a logistical point of view.

Peter Jacobs, head of railway operations north at the port and railway operator RheinCargo, said of the rail service: “This is also strengthening the port of Düsseldorf, which offers the best links to the pulsating Rhine/Ruhr business region as a trimodal logistics site at the heart of the state capital of North Rhine-Westphalia.”

The main focus of the multimodal hub at Düsseldorf will continue to be on handling goods arriving and departing via inland waterways. Mosolf transports cars and commercial vehicles to Rotterdam and Antwerp several times a week on board the MS Terra and its sister ship, the MS Terra 2.