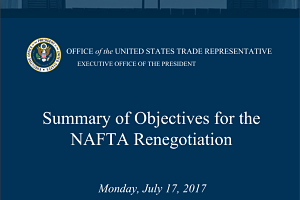 A summary of the US’s objectives in upcoming negotiations over the North American Free Trade Agreement (Nafta) has highlighted a clear desire to retain tariff-free trade arrangements with Canada and Mexico.

Though the summary highlights a reduction of the country’s two large trade deficits with its North American partners as the overriding priority for discussions, it says the country will seek to “maintain existing reciprocal duty-free market access for industrial goods” – a positive signal for the vehicle manufacturing sector, given the deeply intertwined automotive supply chains between the three countries.

The US also wants to “provide for automation of import, export and transit processes, including through supply chain integration; reduced import, export, and transit forms, documents, and formalities; enhanced harmonisation of customs data requirements; and advance rulings regarding the treatment that will be provided to [goods] at the time of importation.”

During his election campaign last year, Trump took aim at the country’s multilateral trade deals, including Nafta and the Trans Pacific Partnership, saying he would renegotiate or cancel them, once in power. In January, he officially withdrew from the TPP.

In May, US Trade Representative (USTR), Robert Lighthizer, notified Congress of the administration’s intention to renegotiate Nafta, officially kicking off the process of reworking the two decade-plus old pact.

Since then, the USTR has been conducting extensive consultations with Congress, stakeholders, and the public. It has received more than 12,000 responses and heard directly from more than 140 witnesses over three days of public hearings.

“Through the renegotiation of Nafta, the Trump Administration will seek a much better agreement that reduces the US trade deficit and is fair for all Americans by improving market access in Canada and Mexico for US manufacturing, agriculture and services,” said the USTR in a statement.

It went on to point out that since Nafta was implemented, the US bilateral goods trade balance with Mexico has shifted from a $1.3 billion surplus in 1994 to a $64 billion deficit last year.

“Market access issues have arisen in Canada with respect to dairy, wine, grain and other products — barriers that the current agreement is unequipped to address,” it added.

The negotiating objectives also include adding a digital economy chapter and incorporating and strengthening labour and environment obligations that are currently in Nafta side agreements – items previously alluded to by Wilbur Ross, the US secretary of commerce.

Another issue raised in the objectives document that may affect the automotive industry is a call to “update and strengthen the rules of origin, as necessary, to ensure that the benefits of Nafta go to products genuinely made in the United States and North America”.

Negotiations are due to begin sometime after August 15th.