Navya chooses Michigan for its first US plant 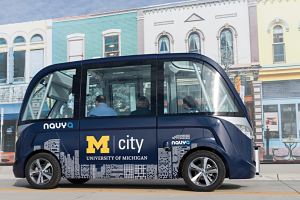 French autonomous vehicle maker, Navya, has chosen the Ann Arbor area in southeast Michigan as the location of its first US assembly plant.

Production is expected to begin in the final quarter of 2017 at the as yet unidentified location.

The company says the decision on the Ann Arbor area builds on its existing partnership with the University of Michigan and its Mcity private public partnership.

Since then, the shuttle has been used to support research and to demonstrate automated vehicle technology at the test facility, with Navya becoming an affiliate member of Mcity.

Henri Coron, VP of sales at Navya, said the company had an immediate objective to build 20 vehicles at the new plant by the end of this year.

“The Ann Arbor area offers a lot of possibilities for Navya to work with our suppliers and hire high-level professionals,” said Coron.

The Arma can carry up to 15 people and is equipped with sensor technology to provide 3D vision, enabling it to map out the environment, detect obstacles in its path and identify traffic and road signs.

The company says the vehicle has been designed to complement current public transport systems over distances that are too short to travel by car but too long to walk.