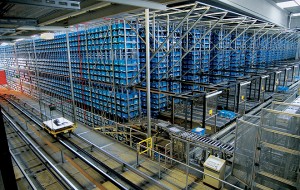 Neovia Logistics has opened a 52,000 sq.m spare parts and warehousing facility in Waldau, Germany that will provide pre-packaging, container handling and storage services in support of Volkswagen’s Genuine Parts and Service Division. It is sited near to the carmaker’s Kassel facility from where it distributes aftermarket service parts. The contract is the first that Neovia has had with the German carmaker.

"Neovia is very excited that, after serving many other OEMs for many years already, we can now also provide the benefits of our industrial contract logistics services to Volkswagen as our newest client," the company's vice president, Michael Kluger, told Automotive Logistics.

The contract to handle the support functions was awarded in April this year and followed VW touring Neovia’s facilities in Breda, Netherlands and Rüsselsheim, Germany. Operations were launched in September. In between, Neovia replaced the entire fleet of material handling equipment and installed new packing tables and lockers, as well as new IT equipment and network components. It also provided safety training ahead of the launch of operations.

“From an overall planning and engineering point-of-view, from delivery to distribution, everything was assembled, in place and fully operational, which contributed to a successful go-live,” said Nathanael Housh, the on-site logistics engineer overseeing the launch of the new facility.

Neovia said it used its SureStart implementation process to handle the transition.

• It was recently revealed that Neovia, which was formerly Caterpillar Logistics but which private equity firm Platinum Equity bought a 65% controlling stake in during 2012, is now being sold to the private equity arm of Goldman Sachs Group. As part of the sale Caterpillar will now be exiting its position in Neovia.