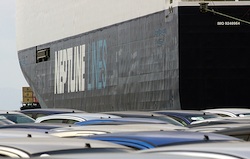 European short sea operator Neptune Lines has made two director appointments. Nikos Paterakis has moved from his role as financial director to operations director, replacing Markos Vassilikos, who left the company earlier this year to pursue other interests.

Nikos Gkezepis is moving to the role of finance director, replacing Paterakis.

Paterakis has worked with the company in the role of financial director for more than seven years. Prior to that he held positions with ABN, AMRO and Minoan Lines.

Nikos Gkezepis has worked at global investment banker Jefferies in New York, in the Maritime Investment Banking Division, where he was most recently vice president. He was also previously a senior auditor at PriceWaterhouseCoopers in Athens, Greece. He will take up the role at the beginning of September. Paterakis will oversee the transition.

Vassilikos left the role of operations director in February and his responsibilities have been overseen by the company’s CEO, Marina Travlos, until now.

“Neptune Lines has accepted Markos’ resignation and wishes to acknowledge his unwavering commitment and the substantial contribution he has made to the company during the last eight years,” she said.