Since Narendra Modi came to power in India last year, there has been a transformation in the way the government is engaging with private business in the development of port infrastructure. The recent development at state-owned Mumbai port is just the latest example of where private companies have worked with the government to quickly bring about change. 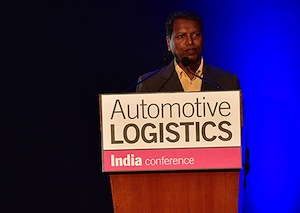 As reported last week from the Automotive Logistics India conference in Delhi, Mumbai Port Trust (MPT) has been working on a facility development project with Ashok Leyland, India’s second largest commercial vehicle maker, and Wallenius Wilhelmsen Logistics (WWL), the world’s biggest maritime finished vehicle services provider. The port needed to develop a facility with global standards for commercial vehicle exports and all three parties came together to build a facility at the port in just two months, between June and August this year.

As some plant and body building locations are in excess of 500kms from the port, Ashok Leyland was seeing a very high ratio of transit damages passed on to overseas dealers. There was also a lack of adequate infrastructure available at the closest facility to the port, which was 54kms away.

Now there is a facility just 5km from the vessel loading point. According to Gautem Dey, senior deputy traffic manager at MPT, there has been a 50% improvement in loading time.

Mumbai port is now handling 160,000 vehicle units annually, for OEMs including Volkswagen, GM, Tata and Mahindra. However, further developments ahead are set to increase that number significantly to 600,000.

According to Gur-Prasad Kholi, managing director, India, at WWL, the new facility and the speed with which it was completed is down to changes in the way business with the government in India is now being done.

“In terms of accessibility to officials and them being able to give you a hearing, that has improved fantastically,” said Kholi. “I have been working with government and port officials for the last five years and I can see that change. It has got a lot more engaged, they feel a lot more comfortable and they are committed to a vision that we need to develop as an export hub and keep the engine of growth running.”

Mumbai is now achieving loading times equal with those in Singapore, between 150-200 cars per hour, which Kholi described as “a fantastic achievement”.

The improvement in activity at India’s ports is not restricted to Mumbai. Dey said all the 12 major ports in the country showed a decline in profit between 2008 and the financial year between 2013-2014. However, in the last financial year, profit improved substantially in all but one of them.

“That was the effect of one year of new government and I’m sure the numbers will go up further,” said Dey. “It is showing a positive trend.”

This is all the better for Mumbai port, which used to be the biggest container port in India, but saw itself being written off just over a decade ago when activity moved to newer neighbouring ports such as Jawaharlal Nehru.

“We were considered a dying port in 2002 and expected to close,” admitted Dey. “The city wanted to make better use of the facilities and other ports were expected to take over.”

Since then, however, MBT has diversified and added significant capacity, including LNG, oil handling and, of course, vehicle handling.

The company is also looking at a rail connection for finished vehicle movements from Sanand, where the Gujurat automotive hub is located.

“Private studies are ongoing,” said Dey. “The plan is to grow, not only in quantity but also in quality.”