Grimaldi has updated its fleet of ro-ro vessels this month with the delivery of two new ships. The Eco Valencia is the first of 12 hybrid ro-ro vessels that will be used to transport vehicles in Europe. The vessels will form part of the new Grimaldi Green 5th Generation (GG5G) class, which are powered by electricity while at port through the use of lithium batteries that are recharged while at sea.

The pure car and truck carrier (PCTC) Grande Florida meanwhile, which has capacity for 7,600 vehicles, is the fifth of a series of seven vessels that will be deployed on the weekly ro-ro connection operated by the Grimaldi Group between the Mediterranean and North America. 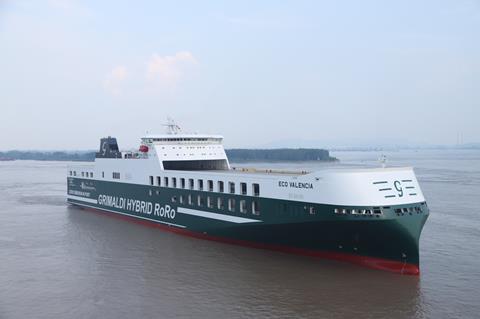 Built by the Jinling shipyard in Nanjing, China, the Eco Valencia is the largest short-sea ro-ro vessel in the world, according to Grimaldi, and can transport 7,800 linear meters of rolling freight, equivalent to around 500 trailers. It has two stern ramps for the simultaneous loading of vehicles, speeding up loading and unloading. Grimaldi said the configuration of its decks and the system of internal ramps make the vessel capable of transporting any type of rolling cargo.

Amongst the vessel’s ecological credentials are an air lubrication system, which reduces the resistance between the ship’s hull and seawater using bubbles of air, thereby saving energy. The hull is also coated in silicone. The Eco Valencia also has a Rolls-Royce integrated propulsion system between the rudder and propeller and a waste heat recovery system.

Nine of the GG5G class vessels will be deployed in the Mediterranean and another three will be operated by the Grimaldi subsidiary Finnlines in Northern Europe. The Eco Valencia will work between Italy and Spain, calling at the ports of Livorno, Savona, Barcelona and Valencia.

“The delivery of the Eco Valencia represents an important milestone not only for our company but more generally for short-sea shipping in the Mediterranean,” said Grimaldi managing director, Emanuele Grimaldi. “In fact, we are deploying increasingly efficient ships with an ever lower environmental impact in the ‘Mare Nostrum’, for the benefit not only of our customers but also of the communities in the cities we serve.”

The Grande Florida, built at Yangfan shipyard, is also equipped to carry both finished vehicles and other freight in combination, with 5,400 linear meters of rolling stock capacity and room for 2,737 vehicles. Grimaldi said the vessel’s hoistable decks give it a highly flexible loading capacity and it is able to transport a range of commercial vehicles and machinery including trucks, tractors, buses and excavators up to 5.3 metres high.

The vessel is also fitted with a side ramp and a quarter stern ramp, the latter allowing the loading of freight units of up to 150 tonnes.

From an environmental point of view, the Grande Florida is fitted with an electronically-controlled MAN Energy Solutions main engine, as required by the new regulations for the reduction of nitrogen oxide (NOx) emissions, as well as with an exhaust gas cleaning system for reducing sulphur oxide (SOx) emissions. It also complies with the latest ballast water treatment regulations.