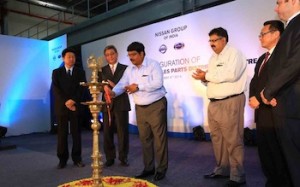 Nissan has opened a parts distribution centre (PDC) outside Chennai in an effort to expand its service network in India to meet demand in line with the growth of vehicle sales in the country. Situated in the SKCL Industrial Park in Sriperumbudur Taluk, it brings the number of PDCs Nissan operates in the country to three.

Nissan Motor India will manage the centre with the support of logistics providers Indospace, Nippon Express and Yusen Logistics.

Earlier this year Nissan Motor India took over distribution of its parts and finished vehicles from Hover Automotive India, its former distributor.

In other news the carmaker has said it will be establishing a network of dealerships in India this year exclusively for its Datsun compact brand. It currently sells the Datsun Go model at Nissan dealerships in the country and has sold more than 5,000 since it was introduced onto the market there in March this year. Production of the brand began in February at the Renault Nissan Alliance plant in Oragadam, near Chennai.

In April, the company sold more than 2,600 units of the Go in India, accounting for nearly half of Nissan’s total sales of 5,300 units there, including Nissan brands Micra, Sunny and the SUV Terrano. Sales for that month were four times what they were in April last year when it sold 1,200 cars.

Nissan has also recently introduced the Datsun Go+ on the Indonesian market. The vehicle will be made at its new 60,000 sq. m plant in Purwakarta, West Java.