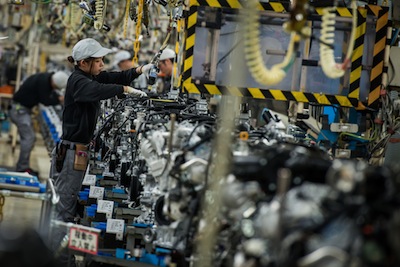 A spokesperson for the carmaker said that there had been no reports of injuries and “only minimal damage” at the plant following the earthquake.

“Due to precautionary safety measures, employees were evacuated for several hours yesterday,” continued the spokesperson. “In the afternoon on the same day, limited operations resumed at the plant, with full assembly operations resuming this morning [Wednesday].”

The facility, which makes engines including the V6, VQ and VR30, was the most badly damaged during the devastating 2011 Tohoku earthquake, which knocked out production at a number of Japanese vehicle and parts plants. While the plant was back in production seven weeks after that quake, it took more than a year to fully repair the Iwaki plant. Nissan invested ¥3bn ($32m) in reinforced foundations to make the floor better able to withstand any future events.

Earlier this year, the Japanese island of Kyushu was also hit by earthquakes that halted operations at assembly facilities across the country, including Nissan’s, as well as dramatically affecting the tier supplier base in the region.