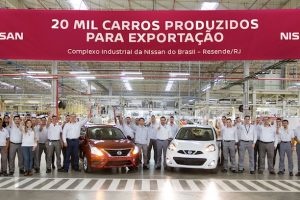 Nissan has exported 20,000 vehicles from its plant in Resende, Brazil, since its export project began in March 2016, it has reported this week. What is more, the carmaker expects to increase exports by 50% in 2018.

The carmaker is sending volumes of the March (43%) and Versa (57%) compact models to eight neighbouring markets – Argentina, Bolivia, Chile, Costa Rica, Panama, Paraguay, Peru and Uruguay. Argentina takes the majority of the output, accounting for 44% of the volumes exported from Brazil even though exports only started to the country at the beginning of this year.

The carmaker introduced a second shift at the plant in July this year and employed 600 more staff to ramp up supply for overseas markets, helping to double output in the six months since April this year, when it hit the 10,000 mark.

“When we started the export project at the Resende Industrial Complex, we knew that Latin America's demand was growing,” said Sérgio Casillas, director of manufacturing operations for Nissan Brazil. “We prepared for that and we want to make Resende an even more powerful export hub. Our factory has a strategic role in the development of Nissan in the Latin American market.”

It is now preparing for production of the Nissan Kicks compact crossover for export. That model has been made at the plant since May for the local market.

"We will export four different versions of the Nissan Kicks crossover and, due to the success of the model, our expectation is to export more than 4,000 units in the first six months," a spokesperson for Nissan do Brasil told Automotive Logistics. "For now, this volume is only for the Argentinean market. However, more opportunities are under analysis."

The Resende plant in Rio de Janeiro, which opened in 2014, has the capacity to produce 200,000 cars and 200,000 engines per year. According to Nissan do Brasil, the facility is located in "a very privileged location" from a logistics perspective, halfway between São Paulo and Rio de Janeiro.

"The transport from the Resende plant to Rio de Janeiro port (170km) is done by trucks, as is usual in Brazil," said Nissan's spokeperson. "There are frequent vessels to attend [the export markets] every month. The only exception is Paraguay, to which we transport the vehicles by truck, from the plant to Asunción."

Carmakers in Brazil have been looking to export markets to sustain production in the country, following several years of recession and poor domestic sales. As reported earlier this month, the improvement in export trade as a stimulus to production has been helped by a less complicated import/export procedure.

The Single Import Declaration, for instance, means a car can be registered in a country to which Brazil is exporting before its arrival there and, as a rule, in parallel to obtaining the import licences. As information is provided in advance, procedures such as risk management can be advanced, ensuring faster flow of cargo.

That has helped an overall increase in the export of vehicles from Brazil. Exports of cars, light commercial vehicles, truck and bus chassis in the first three quarters of this year came to an all-time high of 566,300 units, according to figures from the National Association of Motor Vehicle Manufacturers (Anfavea). This was 56% up on same period in 2016. Full-year 2016 exports came to 520,100 units, meanwhile.

The increase in exports is helping to boost production in Brazil, which has now revised its estimated annual output for this year to 2.7m.

The recovering fortunes of Brazil’s automotive market will be under discussion at this year’s Automotive Logistics South America conference, which takes place next week on November 28th in São Paulo.