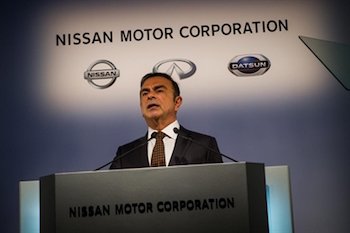 Nissan's CEO, Carlos Ghosn, has said the company's future investment plans in the UK are on hold and will depend on the outcome of discussions between the UK and the European Union on how they will continue to trade in the wake of June's Brexit result. Those discussions are unlikely to start until next year and could take two years to conclude, all of which adds to the ongoing uncertainty in the UK automotive sector following the result.

Speaking to the BBC, Ghosn said Nissan's plans for its Sunderland plant in the north of England would depend on terms governing customs, trade and the free movement of goods. Last year the Sunderland plant built 476,000 vehicles, including the Qashqai, Note, Juke, Infiniti and Leaf. One in three UK-built cars is a Nissan and the OEM exports 81% of its UK output, with the majority going to mainland Europe. The influence of future trade with the EU will affect those exports and the inbound supply of components from overseas.

Following the announcement that the UK would leave, the carmaker was quiet on what its position was. Ghosn's comments that investment is now on hold suggest that unfavourable terms could limit the scope of its plans. Similarly, GM has warned it will review plans for its plant in the UK as Brexit terms are developed.

However, Ghosn was also optimistic about the talks, saying that Sunderland was a "European plant" and that he was confident that British and European politicians would strike an amicable trade deal.

"We are reasonably optimistic that at the end of the day, common sense is going to prevail from both sides," he said.

The comments follow figures released by the UK's Society of Motor Manufacturers and Traders (SMMT) this month which showed the UK passenger car market enjoyed its best half-year performance in terms of vehicle production since 2000. Overall the UK car market manufactured more than 897,000 cars – a rise of 13% on the same period last year. However, last month's figures showed that vehicle sales were flat for July (+0.1%). There has also been a big contraction in broader UK manufacturing and service activity. According to the Purchasing Managers Index (PMI) the reading for manufacturing was down to 49.1 and, for the services sector, down to just above 47. Information for the PMI is gathered using monthly surveys sent to purchasing executives at approximately 300 companies. A PMI result of more than 50 represents expansion of the manufacturing sector when compared to the previous month; a reading under 50 represents a contraction.

The SMMT also published a survey of its members that showed more than 57% of respondents believed the ‘Brexit’ vote would have a negative impact on business.The car industry had shown strong support for remaining in the EU, with 77% of SMMT car association members supporting EU membership ahead of the vote in June.

The vote to leave the EU has affected share prices at the carmakers with plants in the UK and the significant fall in the pound is also likely to lead to an increase in the price of imports. This week Peugeot said it would raise prices in the UK to cope with any increase. With about 85% of new vehicle sales in the UK being imported, that could hit sales. Vehicle exports, which have been at record levels, should get a boost, however with 50-60% of car components typically imported, supply chain costs could rise sharply.

Ian Fletcher, principal analyst at IHS Automotive, told Automotive Logistics in June that while it was still too early to make any certain forecasts the company expected see a decline in domestic sales for 2017 of between 7.5% and 8.5%, “well below where we initially expected it to be”. An 8% drop on current levels would translate into a fall in light vehicle sales of around 235,000 units.