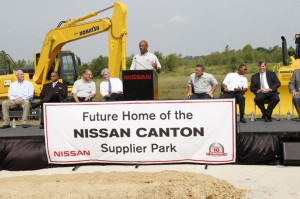 Nissan is building a supplier park at Canton, the company’s vehicle assembly plant in Mississippi. Current plans for the project involve the construction of 1m square foot integrated logistics centre, which will serve as an immediate space for suppliers and will help localise the company’s supply chain.

The centre will support multiple logistics operations including inbound production parts, outbound returnable containers and supplier operations. It is hoped that the project will provide space to support the on-site suppliers necessary for Nissan’s continued growth in production within the US. Representatives from Nissan claim that by 2015, 85% of Nissan vehicles sold in the US will be built in North America, an improvement on the current figure of 69%.

Dan Bednarzyk, vice-president at Nissan for total delivered cost, a recently created position, claimed that “the supplier park will help make us more globally competitive at our Canton Mississippi plant.”

It will lie on the north end of Nissan’s current campus, and will be more than 1m square feet in size. The supplier park will create approximately 800 positions, including an anticipated 400 supplier jobs.

Nissan already has one supplier logistics centre at the south end of the Canton plant, and the company said that it would also make infrastructure improvements to this facility.

Speaking at the centre’s ceremonial opening, the Mississippi governor Phil Bryant said: “The addition of the new supplier park will bring more manufacturing jobs to Mississippi and serves to strengthen our growing automotive sector.”

The investment will support the production on the next-generation Nissan Murano, which the carmaker recently announced would be moved from Japan to Canton in 2014. The factory, which went online in 2003 and it currently employs more than 5,600 workers, also produces the Altima and Sentra sedans, the Armada SUV, Titan and Frontier pickup trucks and NV full-size commercial cargo and passenger vans.