Nissan UK commits to Qashqai and X-Trail at Sunderland plant 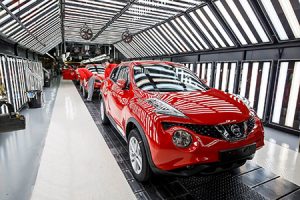 Months of doubt over Nissan’s plans for investment in its Sunderland plant following the UK’s decision to exit the European Union (EU) seem to have been resolved with the announcement that the carmaker will make the next model Qashqai there as well as adding the X-Trail, which is currently made exclusively in Japan.

The carmaker said its decision followed on from the UK government’s commitment to ensure the Sunderland plant remained competitive. It now means Nissan will increase its investment in the plant, securing the jobs of more than 7,000 workers. The company has not put a figure on that investment so far.

Nissan most recently invested £250m ($304m) to extend the plant and accommodate the luxury Infiniti models, which went into production last year. That followed a £125m investment to bring the Note model there in 2013.

Nissan Sunderland has capacity for more than 500,000 units per year and makes one in three of all British cars. Along with the Qashqai, the plant makes the Juke, Note, Leaf and the Infiniti Q30 and QX30. Nissan’s latest plans could push that annual capacity to 600,000.

Plans on holdBack in August Nissan’s CEO, Carlos Ghosn, said the carmaker’s future investment plans in the UK were on hold and would depend on the outcome of discussions between the UK and the EU over continued trade in the wake of June’s Brexit result.

Last week Ghosn declared he was “confident the government [would] continue to ensure the UK remains a competitive place to do business”, following a meeting with UK prime minister, Theresa May. That confidence now seems borne out with Nissan’s guarantee of two new future models.

“I am pleased to announce that Nissan will continue to invest in Sunderland,” said Ghosn this week. “Our employees there continue to make the plant a globally competitive powerhouse, producing high-quality, high-value products every day. The support and assurances of the UK government enabled us to decide that the next-generation Qashqai and X-Trail will be produced at Sunderland. I welcome British prime minister Theresa May’s commitment to the automotive industry in Britain and to the development of an overall industrial strategy.”

Nissan would not confirm when production of the new models would begin, saying only that it was “a few years away from the start of production of both the Qashqai and X-Trail”. Both models entered their current generation in 2013.

Neither would the company divulge what assurances it had been given by the government to go ahead with further investment. The UK government’s business secretary Greg Clark said there was “no cheque book” involved in the assurance given to Nissan and a government spokesperson stated that Nissan had not got a special deal. However, in a letter sent to Nissan before the latest announcement Clark promised to provide funding for training and skills, boost research into electric vehicles (EVs) and increase the use of UK companies in the automotive supply chain.

Supply chain and logisticsThat last point was welcomed by the UK’s Society of Motor Manufacturers and Traders (SMMT), which noted that there were 28,000 UK automotive supply chain jobs supported by Nissan, out of a total of 78,000 associated with British based vehicle makers. One of those suppliers is Calsonic Kansei.

"We are a key supplier to Nissan in the UK and globally, with 1,400 staff in the northeast alone so the decision to build two new models in Sunderland is excellent news," said John Barnett, Calsonic Kansei's vice-president of manufacturing and supply chain. He went on to say that there were now opportunities to win more business and look to restoring some of the company's own supply chain back to the UK, something that gave confidence to global suppliers that the UK was still a good place to invest."

According to the SMMT, billions of pounds have already been invested in domestic supply chain networks to fulfil just-in-time production needs and cut the cost of logistics. This was having the effect that the the content of British-built cars had risen from 36% to 41% over the past five years with the potential to reach 50% in the near future. There is an estimated £6 billion ($7.3 billion) opportunity for component manufacturers as British-based vehicle makers increasingly look closer to home to pursue manufacturing efficiencies, according to the SMMT.

Clark also said the government would be seeking tariff-free access to the EU for the car sector. Those support measures are also being offered to other carmakers in the UK according to comments Clark made in a television interview on the BBC over the weekend (October 30th).

That was another point that the SMMT saw as important. Mike Hawes, SMMT CEO, said that it was important the government made it a priority to safeguard competitiveness and the benefits the industry enjoyed by being in the single market, which included "tariff free trade unhindered by any customs bureaucracy."

Meanwhile, a spokesperson for Nissan in Japan said it could not be more specific on the assurances given by the government and what these included. “All we can say is that the commitment by the government to keep Sunderland competitive gave us the confidence to continue to invest in the plant’s future,” he told Automotive Logistics. “We have a very strong relationship with the government and are satisfied that the commitments from the prime minister, Mr Clark, Mr Hammond [chancellor of the exchequer] and colleagues are robust. There is clearly a firm commitment to the auto industry in Britain and to the development of an overall industrial strategy.”

Previous investments by Nissan in Sunderland have been supported by grants from the UK government’s Regional Growth Fund.

Potential tariffs post-BrexitNissan faces a potential increase in the cost of importing parts once the UK’s withdrawal from the EU is complete. At the same time, while exports continue to do well out of the UK because of the drop in sterling, there are additional fears, especially by the Japanese manufacturers, that vehicles could be subject to a 10% export tariff once the UK is outside the EU. That is of considerable importance to Nissan given that 80% of its UK production is exported abroad, with the majority going to Europe.

One of the likely consequences for UK-based carmakers and suppliers of (at least partial) separation from the European single market is a limit on the ability for them to trade goods and services. However the true implications of the UK's Brexit decision could take years to become clear.

While welcoming the government's move the SMMT called for wider assurances for investors based on the potential challenges of a separation from the European single market.

“Today’s announcement is good news for UK automotive and jobs, confirming Britain as a leader in automotive production,” said Mike Hawes. “To secure this position, however, we need government to provide public assurance to investors that our advantages will be maintained – namely, a competitive business environment, the ability to recruit talent from abroad and the continuation of all the benefits of the single market as we leave the EU.”

Sunderland to be crossover hubNissan said its decision to add production of the X-Trail model in the UK was because the Sunderland plant is being positioned as the carmaker’s European production hub for crossover models.

“In fact, given the growth of the crossover segment, if demand is sufficient we would look to take the plant to three shifts on two lines, meaning more production and more jobs,” said Nissan’s spokesperson in Japan.

From a supply chain perspective, Nissan said it expected its decision to move the X-Trail there would attract more key suppliers to the northeast of England, supported by the UK government’s industrial strategy.

The X-Trail is currently made at the Kyushu plant in Japan which last year made 220,000 units, as well as 44,000 units of the Rogue Select. The Rogue SUV is equivalent to the X-Trail and for sale in the US. Total output of the Rogue SUV is set to increase before the end of this year as Nissan has added production in Kyushu for export to the US, where the Rogue is selling well.

Asked whether production of the X-Trail would continue at the Kyushu plant, Nissan’s spokesperson said the move to production in the UK did not mean X-Trail production would stop in Japan and it could not comment on future production plans.

“What we can say is that we’re committed to maintaining production of 1m vehicles or more in Japan,” he said.

Read more about the implications of the British decision to leave the European Union.

This story was updated on November 1st to add input from SMMT.