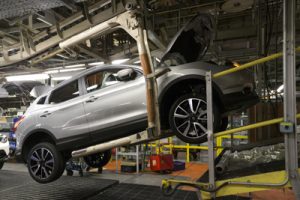 Although Nissan will eventually shift some production of its second-generation Qashqai crossover model from the UK to Russia, the transfer won’t happen this year.

According to Colin Lawther, senior vice-president for manufacturing, purchasing and supply chain management at Nissan Europe, the carmaker will first stabilise production of the new Qashqai, which has just begun rolling off the line this week in Sunderland, in northeast England. Later, it will move some production to Russia to meet local demand and to take advantage of lower duties and logistics cost.

“From a Russian point of view, it is quite advantageous to build in Russia for Russia,” Lawther told Automotive Logistics during a press conference in Sunderland. “We intend to make that transfer at some point in the near future, though not in 2014.”

Nissan’s plant in St Petersburg is doubling capacity to 100,000 units to meet Russian government targets for domestic manufacture in exchange for preferential import tariffs. Lawther also said that Nissan would transfer some production of the X-Trail, which shares a platform with the Qashqai, from Japan to Russia. “We will then use the common componentry between Qashqai and X-Trail to increase the local supply base in Russia,” he said.

He did say, however, that the production would start with parts sent from the UK. “We already supply some material from the old Qashqai and X-Trail to Russia from the UK, including suspension parts and engines from Sunderland,” he said. “There is an existing supply chain between here and St Petersburg.”

The Qashqai has been the flagship vehicle from the Sunderland plant since its launch in 2007, with production surpassing 300,000 units in 2011 and 2012, and reaching 286,000 last year in its last model year. More than 80% of production is exported from the UK, with 12% bound for Russia and 59% to the rest of Europe, according to Nissan.

The carmaker has made a number of logistics improvements to Sunderland for the new Qashqai, and is planning more for the launch of Infiniti production by 2015.