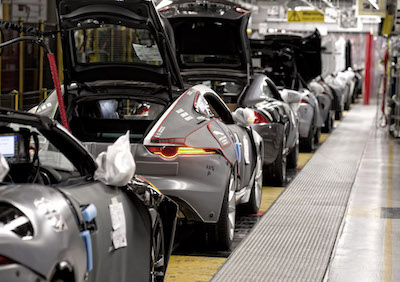 While the political debate and negotiations continue, two car plants in the UK plan production changes and the SMMT has warned a no-deal Brexit could add at least £5 billion ($6.6 billion, €5.6 billion) in tariffs for the EU’s automotive industry.

Jaguar Land Rover (JLR) said it is making some temporary adjustments to production schedules at Castle Bromwich in central England “in light of the continuing headwinds impacting the car industry.”

Assistant general secretary of the Unite union, Tony Burke, said the move to a three-day week at the car plant was partly due to the “chaotic mismanagement of Brexit negotiations by the government, which has created uncertainty across the UK’s automotive industry and the manufacturing sector generally.”

The government’s “mishandling” of the UK’s transition to electric vehicles has compounded the problem, he added.

Industry observers said the industry is also affected by weakened consumer confidence and reduced sales of diesel vehicles, a trend which impacts on JLR more than others because of its greater reliance on diesel-powered cars in its British sales mix.

Castle Bromwich’s 1,000 employees will remain on full pay, despite decreased working hours from October until the start of December.

JLR prefaced the production announcement by saying it is standard business practice to regularly review schedules to ensure market demand is balanced globally. It added: “We are continuing to over-proportionally invest in new products and technologies, and are committed to our UK plants, in which we have invested more than £4 billion since 2010 to future proof manufacturing technologies to deliver new models.”

Elsewhere, next year’s annual maintenance at the 4,500-employee Mini plant in Oxford will begin on 1 April, the first working day after the UK is scheduled to leave the European Union, owner BMW announced.

The German company said that “as a responsible organisation” it is bringing forward the four-week summer shutdown “to minimise the risk of any possible short-term parts-supply disruption in the event of a no-deal Brexit.”

BMW added: “While we believe this worst-case scenario is an unlikely outcome, we have to plan for it.”

The group said it remains committed to operating in Britain, where it also produces BMW and Rolls-Royce cars, regardless of the Brexit outcome.

Unite’s Tony Burke said BMW has taken the “sensible step” to bring forward its essential work, adding the decision underlines the uncertainty facing one of the UK’s flagship industries.

Meanwhile, new analysis by the UK’s Society of Motor Manufacturers and Traders (SMMT) suggests that a no-deal Brexit and the resulting tariffs on light vehicles alone would add a minimum of £5 billion to the collective EU-UK auto trade bill. The calculations are based on standard levies of 10% under World Trade Organization rules.

If passed directly on to consumers, import duties would push up the cost of UK-built cars sold in the EU by an average £2,700, and light commercial vehicles by £2,000. British buyers would face rises of £1,500 and £1,700 respectively on EU-made cars and vans. Such increases would affect demand, profitability and jobs, said SMMT.

It also pointed out: “Tens of thousands of parts making up a vehicle cross EU borders multiple times before final assembly, with the majority of components going into UK-built cars coming from EU suppliers, supporting supply chain jobs across the region.”

The UK exports some £3.4 billion worth of components for vehicles built in Europe, and sources almost three times that sum from EU-based suppliers. More than 1,100 trucks cross into the UK from the Continent every day – the vast majority without a customs check – to deliver some £34 million worth of parts to UK plants for vehicles and engines, which are then exported back to the EU, the society’s statistics show.

“UK automotive is a key component of this success,” said SMMT. It is the EU’s second largest new car market, worth around £29 billion to EU manufacturers every year, and the fourth largest car manufacturing nation. Its revenue is some £82 billion, supports 856,000 jobs (186,000 in manufacturing), and is responsible for 11% of the EU’s auto manufacturing research and development outlay. British buyers registered around 1.9 million cars and vans from the EU last year.

SMMT describes automotive as a deeply integrated, EU-wide industry which has sought to maximise the benefits of a single market and customs union to reduce costs, improve quality and embrace innovation.

The society is calling on all Brexit negotiators to be pragmatic, secure a withdrawal agreement and transition, and safeguard one of Europe’s most valuable economic assets.

Referring to the highly integrated nature of the automotive sector’s logistics, SMMT said: “Without a withdrawal agreement, on 30 March 2019 this trade will, as a minimum, be severely disrupted – potentially halting production, undermining competitiveness and negatively impacting the industry in the UK and Europe.”