"No gain" from Brexit for UK automotive says government committee 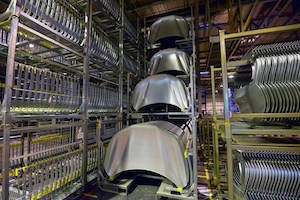 Divergence from the EU’s regulatory regime post-Brexit will only bring extra costs and no potential benefits for the UK’s export-led automotive industry, said a British Parliament committee.

“The automotive sector in Europe is heavily integrated, with highly complex and efficient supply chains relying on the friction-free transfer of components across the continent. The sector is highly competitive, with high volumes and low profit margins,” the business, energy and industrial strategy (BEIS) committee said in a report on the possible consequences of Brexit for the UK’s automotive industry.

The single market, customs union and related regulatory and trading environment have all been instrumental in making the industry one of the country’s most productive and successful sectors, directly or indirectly employing more than 900,000 people and generating almost a tenth of the UK’s manufacturing output.

Effects of diverging from the EU’s regulatory framework include longer journey times, an added risk of delay and extra customs bureaucracy within supply chains, making Britain’s automotive sector less efficient, said the report. It also found that divergence would act as a disincentive to international carmakers looking for a European base.

“In a highly competitive market, small margins can make a significant impact on investment decisions,” the committee stated, adding that in recent years UK car plants have often been selected to produce models intended for the European market, which is the biggest for Britain’s vehicle exports.

“If the government wishes to uphold the UK’s reputation as a good location for volume vehicle manufacturing, consistent with its industrial strategy, we recommend that it should in its negotiations on withdrawal place a high premium on securing frictionless trade for the automotive sector,” said the committee.

Arguing that regulatory convergence is desirable because it reduces costs, promotes consistent, high standards and benefits consumers, it added: “No company wants to make cars to different sets of standards. It makes commercial sense for the UK to remain aligned with standards in the single market, which provides the majority of our trade.

“The establishment of a new regime for the approval of UK-manufactured vehicles would increase costs and bureaucracy for UK-based companies, and make the UK less attractive as a development and manufacturing base for vehicles.”

Turning to the wider issue of global trade, the report stated: “The UK cannot expect an expansion of trade overseas to outweigh the loss of trade to Europe arising from a 'hard' Brexit. As most volume manufacturers in the UK are global and foreign-owned, any new bilateral trade deals secured by the Government are unlikely to lead directly to a significant increase in investment and jobs in the UK automotive sector.”

Given the cross-boundary complexity of automotive supply chains, mass-produced cars in the UK are less than a quarter British for trade-deal purposes, the committee pointed out.

“We recommend that the government should prioritise securing the roll-over of existing EU free trade agreements, with the necessary amendments, to allow UK content to count as EU for rules-of-origin purposes. New trade deals will also need to accommodate the largely European content of cars built in the UK,” the committee urged.

“Without such provisions, the business case for locating volume manufacturing of vehicles for export in the UK would be flimsy at best and non-existent at worst,” the report added.

Leaving the EU without a deal “would undoubtedly be hugely damaging". The committee warned that the government "should not seriously contemplate this outcome”, warning that a no-deal exit would lead to a 10% tariff on cars.

“It is difficult to see how it would make economic sense for multinational volume manufacturers, the bulk of the UK automotive sector, to base production in the UK in a no-deal or WTO [10%] tariff scenario. The shift of manufacturing to countries within the customs union and single market would be inevitable; the cost in UK jobs could be in the hundreds of thousands, and inward investment in the hundreds of millions.”

The report concluded that there were no advantages to be gained from Brexit for the automotive industry for the foreseeable future and that negotiations were simply an exercise in damage limitation.