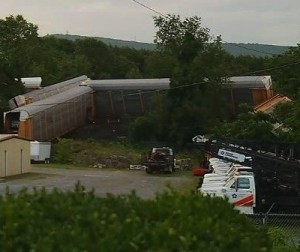 [This story was updated on 18 July] A 33-wagon Norfolk Southern train including a consignment of vehicles, including Ford trucks, has derailed in south-western Virginia, US. The incident, which took place on Monday evening (14 July) in the town of Wytheville, resulted in 12 Autorack wagons and two double-stacked containers crashing off the tracks.

Though the derailment took place in a built up area there were no injuries or hazardous materials spilled according to the company.

The cause of the crash is being investigated by officials from the National Transportation Safety board and the clean up is being led by Norfolk Southern.

Each Autorack wagon can carry up to 22 light trucks and minivans, meaning that around 260 vehicles could be damaged.

A spokesperson for Ford confirmed that there were some Ford multi-levels involved in the derailment. "[W]e are working with the NS Railroad to get further details and resolution," said a spokesperson for the carmaker.