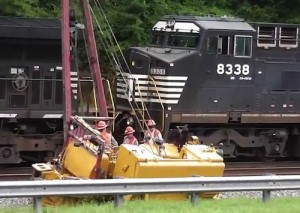 A Norfolk Southern train carrying finished vehicles eastwards between Ohio and Delaware in the US has derailed, damaging at least 200 units.

The rail provider is working with the Federal Railroad Administration to discover the cause of the incident which saw 17 rail wagons leave the tracks on Saturday (20th), nine of which turned over. There was damage to a total of 26 wagons out of the 107 making up the full train. Six of the derailed cars were put back on the tracks but 11 were too damaged and cannot be fixed.

A spokesperson for Norfolk Southern confirmed the wagons that landed on their sides were loaded with auto racks but he added that no injuries were sustained or hazardous materials involved. The company would not reveal which OEM brands were being carried on the wagons affected.

The clean up of the site has been efficient and all three rail lines damaged by the derailment were reopened by Monday this week.

Norfolk Southern has a mixing centre in Fostaria in Ohio, which brings together vehicles from various locations in the north-east region. Vehicles from that centre were on their way to Wilmington in Delaware.

This is the second derailment this year by a Norfolk Southern train involving finished vehicles. In July a 33-wagon train carrying a consignment of vehicles, including Ford trucks, derailed in south-western Virginia. That incident resulted in 12 auto rack wagons and two double-stacked containers crashing off the tracks.