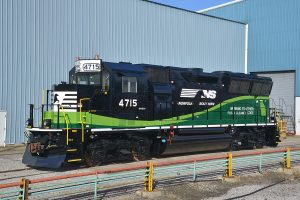 The first engines – GP33ECO switching locomotives – have been funded by the federal Congestion Mitigation and Air Quality (CMAQ) Improvement Program.
Following in-service testing in the Altoona area, they will be permanently assigned to their respective grant award areas of Chicago and Atlanta, said Norfolk Southern in a statement.

Funding for the locomotive to be used in Georgia (on Norfolk Southern’s Atlanta Terminal) was awarded by the Georgia Department of Natural Resources Environmental Protection Division.