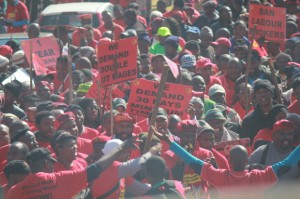 Ongoing strike action by more than 220,000 workers affiliated with the National Union of Metalworkers of South Africa (Numsa) has caused Ford, Nissan and Toyota to shut down production this week. The action is affecting the supply of components to the majority of carmakers in the region with GM having already lost eight days of production.

The strike is estimated to be costing the industry R300m ($28m) a day, according to the Steel and Engineering Industries Federation of Southern Africa (Seifsa).

As reported last week, NUMSA-affiliated workers are locked in a wage dispute with Seifsa, which has a number of critical component manufacturers as members. The strike is now in its third week.

Numsa rejected a final offer by Seifsa on Monday this week (14 July).

"We have now done everything that we could possibly have done to end the strike and we deeply regret the fact that all our efforts have been in vain,” said Kaizer Nyatsumba, CEO of Seifsa. “It is very unfortunate that a strike which has already caused much damage to our economy appears set to continue indefinitely.”

With component supply used up Ford has been forced to suspend production at its Silverton assembly plant, which makes the Ranger, and at its Struandale engine plant. The carmaker refused to provide further comment on what contingencies it was working on to mitigate the impact of the shutdown.

GM South Africa said that it built up sufficient inventory of vehicles in anticipation of the strike to ensure ongoing supply of vehicles to customers in the short to the medium term.

“Our parts and accessories operations are running as normal, ensuring full aftersales service and support to our customers,” added a spokesperson.

Nissan closed its plant at Rosslyn on Monday for a full week.

Toyota, meanwhile, has had to suspend assembly on both lines at the Prospecton facility in Durban but like Ford, did not provide further comment. The carmaker makes the Corolla, Hilux and Fortuner models at the plant.

For its part BMW said it was having to reduce output to two shifts.

“The current NUMSA strike impacts nine of Plant Rosslyn’s more than 200 suppliers,” said the company in a statement. “However, some of these components are critical for production to take place. That being said, this strike was foreseen and some contingencies were put in place to lower the risk to the plant. This includes production in only two shifts instead of three for the time being. However, we hope for a speedy resolution to the strike in order to not put Plant Rosslyn’s production volume at further risk.”

Carmakers across South Africa were affected by similar strike action taken by Numsa in autumn last year, which also affected component suppliers. According to the African Manufacturers’ Employer Organisation (AMEO), that strike action lasted a month and cost the industry up to R600m ($60m) a day.

The repeated and prolonged action has once again raised the question of South Africa’s image as a manufacturing base.

“The ongoing labour disruptions are harming the South African economy and are affecting the country’s image around the globe,” said GM in a statement this week. “Government, business and labour need to work together in a constructive manner to implement solutions which are in the best interest of the country as a whole.”