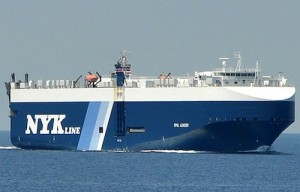 Japanese transport and logistics giant, NYK, has agreed to pay a fine of $59.4m as part of a plea agreement with the US Department of Justice (DoJ) following charges that it violated US anti-trust laws in connection with shipping services for finished vehicles.

A number of the world’s leading ro-ro providers, including NYK Line, Mitsui OSK Lines, K-Line, Eukor Car Carriers and WWL, were subject to an anti-trust investigation in 2012 following suspicion of being involved in a cartel to coordinate price hikes for transporting vehicles and other cargo from Japan to Europe, the US and other Asian markets. The US case followed similar action taken in the same year by the Japan Fair Trade Commission.

The company said it would record the cost as an extraordinary loss for the third quarter in its fiscal year ending in March this year.

According to a one-count felony charge filed in the US District Court for Maryland cited by the DoJ, NYK conspired to suppress and eliminate competition by allocating customers and routes, rigging bids and fixing prices for the sale of international ocean shipments of ro-ro cargo to and from the US and elsewhere, including the port of Baltimore.

NYK said that it had been committed to complying the laws and regulations of Japan and all other jurisdictions following the investigation.

“Nevertheless, NYK wishes to express its sincere regret to shareholders, customers and all relevant personnel for the concern caused by this matter,” said the company. “NYK will continue to make a best effort to prevent recurrence and to recover trust as a company.”

Bill Baer, assistant attorney general in charge of the DoJ’s Antitrust Division said: “This is another step in the effort to restore competition in the ocean shipping industry to the benefit of US consumers. Including today’s charges, three companies have now agreed to plead guilty to participating in this long-running conspiracy. We are not done. Our investigation is ongoing.”

Last September, K-Line agreed to plead guilty and pay a $67.7m criminal fine for its involvement in a conspiracy to fix prices for ro-ro services on international routes. That followed a similar move made by Chile’s CSAV, which agreed to pay a fine of $8.9m in February last year.