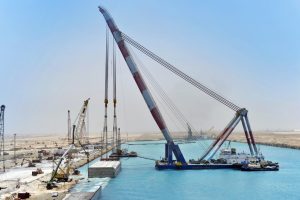 Global shipping line, NYK, has signed a joint venture with the owner and developer of King Abdullah port in Saudi Arabia – Ports Development Company (PDC) – to build a ro-ro terminal there. Due to be fully operational in the third quarter of 2016, KAP RoRo Terminal will be the first terminal dedicated to ro-ro cargo in the country and NYK’s first automotive logistics facility in the Middle East region.

The terminal will have capacity to handle 600,000 vehicle units a year according to NYK, which it said would address increasing demand from a growing market in the Middle East.

PDC opened a container terminal at the port in 2014. The company is a joint venture between the Saudi Arabian conglomerate Huta Marine Works and Emaar, ‘The Economic City’, the Tadawul-listed real estate development and management company that is behind the 168m sq. m development at King Abdullah port.

NYK did not provide further details on the development other than to say it would continue to respond to customers’ demands in the Middle East regain as part of its More Than Shipping 2018 management plan.

JLR scraps plans for plant in the desert
There was no word either on which carmakers were expected to be principal customers for services through the terminal from next year. One carmaker who it appears will not be using it for exports though is Jaguar Land Rover, following reports that it is pulling plans on building a facility in the country. According to The Financial Times the carmaker’s plans to build a factory have been “quietly scrapped”.

Last year JLR signed a letter of intent with the Saudi government’s National Industrial Clusters Development Programme to examine the financial viability of building cars in the Middle East.

That followed the carmaker signing a preliminary agreement with the Saudi Ministry of Commerce to build a plant there to produce 50,000 Land Rovers a year from 2017.

"Jaguar Land Rover continues to have ambitious plans for growth globally and regularly reviews opportunities to secure further manufacturing capacity in a range of markets," said the company in a statement sent to Automotive Logistics. "Our manufacturing plans for UK, China, Brazil and Europe are our main focus and priority at this time."