NYK Line has placed an order with Shin Kurushima Toyohashi Shipbuilding to supply what will be the world’s largest pure car and truck carrier (PCTC) powered by liquified natural gas (LNG). The 200-metre long vessel, which will be delivered in 2020, is the first large LNG-fuelled PCTC to be built in Japan. 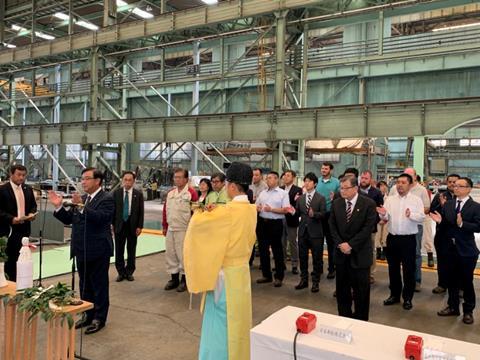 NYK held a keel laying ceremony for the new vessel

The vessel will be able to transport 7,000 units (standard vehicle equivalent), despite being equipped with larger LNG fuel tanks, thanks to the optimisation of the vessel’s layout, particularly its width.

The new design fits in with government projects to reduce CO2 emissions through the use of alternative fuel.

It is estimated that the vessel will be in the region of 40% more energy efficient as a result, which is significantly better than the International Maritime Organization (IMO) EEDI phase 3 requirements that will become effective in 2025. These govern the number of grams of carbon dioxide (CO2) required to carry one ton of cargo for one mile, with the reduction rate from the baseline being gradually enhanced. Car carriers were required to implement reductions of 5% by 2015 (Phase 1), which will increase to 15% by 2020 (Phase 2), and 30% by 2025 (Phase 3).

Crucially, the vessel has also been designed to meet mandated reductions in sulphur oxide (SOx) emissions set by the IMO, which become effective as of January next year. These mean the allowable limit of sulphur in ship fuel oil will be reduced from 3.5% to 0.5%. NYK’s new car carrier is expected to cut sulphur oxide (SOx) emissions by approximately 99% and nitrogen oxides (NOx) by approximately 86% when compared to conventional heavy oil–fired engines.

NYK has already positioned itself in the vanguard of greener vessel operators, having introduced the world’s first LNG-fuelled car carrier in 2016.