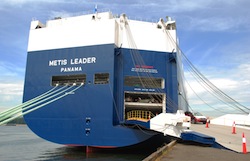 NYK Line’s newest vessel Metis Leader had made its maiden voyage from Kawasaki in Japan to the port of Vancouver on the US Pacific coast carrying more than 5,000 Subaru passenger cars.

It called at New Westminster port in Canada on route to unload some of the vehicles before delivering more than 2,000 at Vancouver. The vessel is moving to the port of Richmond in California before making its final stop in Irago, Japan. It will not be collecting any vehicles from Vancouver or Richmond for the return leg of its journey.

The Metis Leader has capacity for almost 7,000 vehicles, with more than 52,000 square metres of space across 12 decks. It was completed at Imabari Shipyard in Japan and launched in July this year.

A spokesperson for NYK said the route allocated to Metis Leader, as with its other car carriers, was based on demand and transit times would differ in each case.

The vessel is owned by Cyprus Maritime. It is one of around 100 vessels that NYK Line currently has in service.