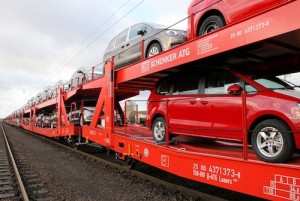 DB Schenker has said that around 200 of its trains were affected by the recent rail strike in Germany, impacting freight services in automotive production regions. Carmakers, however, appeared to avoid major disruption, in parts thanks to preferential treatment by the railway

Services were hit when train drivers working for Deutsche Bahn who were affiliated with the GDL union went on strike on October 17th at 15.00. The action continued until 4.00 on the following Monday morning (21st). Freight services were the first to be affected.

A spokesperson for DB Schenker, the transport and logistics division of Deutsche Bahn, said that the strike had caused significant disruption to rail freight traffic across Germany, including in Mannheim and Frankfurt in the southwest of the country, as well as in the southeast and north.

“By reducing the number of services offered and restricting acceptance of special trains, DB Schenker Rail has been attempting to maintain scheduled operations as far as possible,” said the spokesperson. "Time-sensitive [services] and trains which were important for supply chains were prioritised. For all measurements, we stood in close consultation with our customers.”

German carmakers BMW and Volkswagen said that the GDL strike did not have any direct impact on their production or outbound services. A spokesperson for BMW said that the carmaker was given preferential treatment for outbound rail movements and that rail transport for inbound material only plays a minor part in the overall process.

Volkswagen said the strike “did not lead to any noteworthy interference” in its production.

DB Schenker said that it did everything to reduce the backlog of trains following the strike and that the situation was back to normal by the middle of last week, approximately three days after the strike ended.

The strike also had a big impact on passenger services during the autumn holiday weekend. The disruption led Deutsche Bahn to issue a statement that said the GDL union was “running amok” and that rather than being concerned with the interests of its drivers the strike was the product of “a lust for power”.

The GDL said that it would protect the fundamental rights of its members and strive to negotiate collective agreements because it was instructed by its members to do so. It stated that there continued to be pressing problems related to working times for all of its members employed by Deutsche Bahn, not just the train drivers. The union also said that it would consider further action in the first week of November if Deutsche Bahn continued “to limit the fundamental rights of GDL members”.

Hot on the heels of the rail strike, Germany was also hit by a strike by airline pilots working for Lufthansa in a dispute over changes to the company’s retirement and pension plans. The dispute which ran for two days caused the cancellation of 1,500 short and long-haul flights.