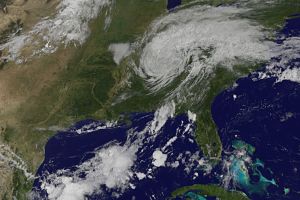 The devastating effects of Hurricane Harvey in the US are still being assessed. The death toll already stands at 50, while estimates are that damages will exceed a value of $100 billion.

The Texan city of Houston seems to have taken the biggest hit, while ports and car plants were shut ahead of the category-four hurricane making landfall on Friday August 25th.

Both General Motors and Toyota, with plants in Arlington and San Antonio respectively, were keeping a close eye on developments as the storm made its way inland.

“We cancelled production for our alternative work schedule at the San Antonio plant last Saturday, but resumed normal production from first shift Monday morning,” said a spokesperson for Toyota Motor North America, adding that there were no reports of production being affected at any of its other manufacturing facilities.

GM said it had not seen an impact on production schedules at its Arlington assembly facility in Texas or at its other facilities in the region.

“We are closely monitoring the storm’s continued impact on our Texas employees and their families, facilities, dealers, suppliers and customers,” said a spokesperson for the carmaker. “We are closely working with our supply base to identify potential issues and working with them to come up with solutions to those issues.”

A spokesperson for Volkswagen Group of America (VWoA) said the company was continuing to monitor the effects of Hurricane Harvey on various stakeholders, including its employees and dealers.

“Our priority and main concern remains the safety of our employees, business partners and the community. We can report all VWoA employees have been accounted for and are safe. We will provide support systems for those whose homes have been affected,” the spokesperson told Automotive Logistics.

The company also operates two key facilities in Texas, namely the Port of Houston and the Fort Worth Parts Distribution Centre (PDC).

Ports shutdownThe Port of Houston was shut down in advance of the storm and in coordination with port authorities.

“To mitigate potential impacts, our crews took precautionary measures including moving vehicles away from at-risk areas, securing materials and other potential hazards and working with our carriers to avoid putting anyone in harm’s way,” said the VW spokesperson.

“At the PDC, which ships service parts to dealers in at-risk areas, we expedited processing and shipments (both inbound and outbound) to mitigate any potential delays.”

A number of other key vehicle processing ports located within the storm area also took pre-emptive measures ahead of its arrival.

Amongst them was Galveston, on the coast near Houston, where shipping company WWL has operations.

Damage to WWL’s operations was limited, however, with full power and all computer systems remaining operational. WWL said the terminal was open for pickups on Friday September 1st, and that it would be fully operational on Tuesday September 5th.

“WWL concluded its preliminary assessment phase in preparation for a phased opening and is pleased to say that there is no evidence of tide marks, water damage, or damage from wind-blown debris to any cargoes stored on the dock. All indications were that no damages were sustained as a result of the hurricane,” said a company statement.

“Where possible, vessels were rerouted to other ports and cargo was picked up by customers, or moved to higher grounds within the terminal.”

BMW opened a vehicle distribution centre (VDC) at the US port of Galveston, Texas, last year.

At the time of its opening it was reported that the centre, which has 4,000 sq.m of processing space on an 8-hectare site, would import and process 32,500 vehicles annually for onward distribution to 45 BMW and Mini dealers across four states: Texas, Oklahoma, Louisiana and Arkansas.

Meanwhile, the port of Freeport remained open during the inclement weather, with the exception of the administration building. The channel itself was closed from Thursday August 24th until August 31st, when it received its first vessel, from Höegh Autoliners, following permission from the captain of the port.

“Horizon Terminal Services Freeport reopens today, and we have not observed any damage to facilities, sheds or installations,” said Höegh in a statement.

Freeport is well protected from damage by the ocean due to its protected approach and the storm levies that are in place. There was also no flooding from the rain.

“There has not yet been occasion to do a full survey of damage to vehicles from flying debris, but none has been observed and as good preparations were made, we are quite optimistic,” it added in a statement last week.

On the vessel side of things, the shipping company said a couple of vessels experienced some delay, but no inbound cargo had been deviated.

The port of Corpus Christi has also already started receiving its first vessels since the storm passed.

According to the latest Finished Vehicle Logistics North American ports survey, Galveston imported 15,933 cars in 2016; Houston handled a total of 85,499 vehicles, with the bulk of those being imports; while Freeport imported 19,200 vehicles and exported 33,800 vehicles for a total of 53,000 in the year.

Impact on railThe impact of the flooding on the rail network has meant a number of service alterations. Houston is a major rail freight hub handling trains for North America’s class one railroads and all carriers operating in the region have been affected.

Union Pacific, which has its headquarters in Houston, said it had suspended rail operations along the Texas Gulf Coast from Brownsville through Corpus Christi to Houston and east to Lake Charles in Louisiana. The company has put embargoes on all rail traffic heading to Gulf Coast locations and others within the Houston area and is recommending that customers divert cars where feasible. None of UP’s trains are operating through flooded and storm-damaged areas.

In a statement issued on August 31st, the company said it was using alternate routes through Longview and Dallas to avoid the Houston area.

“Union Pacific has identified critical customer situations – such as shippers supporting the public with resources such as power, gasoline and chemicals – and is working to track, reroute or expedite these shipments, among others, to the extent possible’” said the rail provider.

The company said it was using drones, helicopters and high-rail vehicles to make inspections, and that crews were assessing rail structures, signal systems and crew availability across the Houston complex.

“The goal is to complete inspections of accessible areas before end of the week (September 8th). “Work has already begun to reassemble Houston’s major rail yards at Englewood and Settegast near downtown.”

The company said it was making efforts to reopen access into the Fort Worth area to the north and towards the south-west of Houston.

Kansas City Southern (KCS), meanwhile, said its line between Kendleton in Texas (south-west of Houston) and Laredo, on the Mexican border, had been closed since August 25th. The Laredo border crossing handles the majority of automotive freight moving up from Mexico into the US.

KCS said in a statement that force majeure measures had been declared on operations, including for its Mexico branch (KCSM) and an embargo for impacted areas on the US network. At that point, the company had not sustained “significant damage” to its rail infrastructure but was wary of how the situation was expanding into new areas on its system, including into Beaumont and Lake Charles, Louisiana.

In a statement issued on August 30th, KCS said it was monitoring the weather, the forecast and its network. “[We] are working closely with our rail partners to have a plan in place for possible detours, should they be needed, once the rain subsides and assessments can be made.”

BNSF, which has its headquarters in Fort Worth, near Dallas, said its rail yards at Silsbee, Galveston and Beaumont remained closed due to flooding, and its South Yard, Dayton Yard and Casey Yard had reopened with limited operations. Dire road conditions were preventing access to a number of facilities but as of Thursday (31st), the automotive facility at Houston Pearland was open and had started unloading operations.

The company said crews were making significant progress in restoring rail services and facility operations in the Houston area and in south-east Texas. Service was restored on the Houston subdivision on Thursday night (31st) as well as to a greater portion of the Galveston subdivision.

BNSF said it was continuing to re-route or divert as much traffic as possible around the affected area until flood waters receded and storm damaged lines could be repaired. “Routes are open into central Texas and traffic is moving through San Antonio, including trains destined for Mexico through our Eagle Pass gateway,” said the company in a statement.

Bad timingResearch from LMC Automotive said the storm was also likely to have a significant effect on US vehicles sales, given the importance of the market.

“Timing could not be worse, as the US market has been contracting throughout 2017 relative to 2016 and the impacted market’s share of US sales has declined 0.3 percentage points in 2017 YTD from 2016,” said LMC in a note. “Harvey will depress one of the most critical selling periods of the year, spanning the August sales month close and Labor Day weekend.”

However, for 2017 overall, LMC now expects a very slight 15,000-unit boost in sales, due to replacement demand for scrapped vehicles. This replacement process is expected to spill into 2018, and so a more significant positive impact of about 250,000 units could be felt next year.

With additional contribution by Marcus Williams