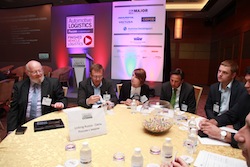 Following table discussions at the Automotive Logistics Russia conference held in Moscow in June this year, Renault Nissan, together with a number of OEMs and logistics providers, have revealed that they are planning to set up a new automotive logistics interest group for manufacturers and providers operating in the country.

According to an email from Renault Nissan inviting other companies to join, which was shared with Automotive Logistics, the carmaker has proposed, together with software specialist Vehnet, that an association is formed that would meet around four times a year. The Russian Automotive Logistics Association (RALA), as the group will be called, would aim to create, adopt and raise service standards in response to customer requirements. It would also aim looking to improve efficiency and cost-effectiveness in the supply chain in Russia. RALA would try to influence policy and legislation as well as create an industry-wide environmental policy.

The decision to establish RALA followed a round table discussion led by Steve Jones, founder and managing director of Vehnet (pictured left), on the last day of the Automotive Logistics Russia conference. According to the email, subsequent discussions with Jones and other colleagues have built towards the establishment of a representative interest group.

“It was clear at the discussion that formal and informal discussions between OEMs and LSPs would be of great benefit, as we can discuss jointly our shared interests, problems and solutions,” said the email, which was sent out by an outbound logistics manager at Renault Nissan.

It went on to say that the group would start by initially inviting directors and managers involved with outbound logistics at the OEMs and move onto involve LSPs and others interested parties, including those in the inbound sector.

The initial plan for RALA is to hold four meetings attended by decision-making representatives from those OEMs and LSPs. The first meeting is planned to be held in September.