Official start to Mini production in the Netherlands 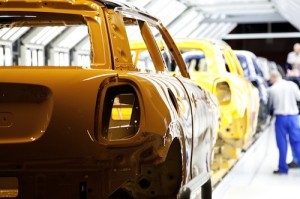 VDL Groep bought the Nedcar plant from Mitsubishi at the end of 2012 following the Japanese carmaker’s decision to end production of Colt and Outlander vehicles there. A start was made on converting the car plant for the production of Minis under contract to BMW from the beginning of 2013.

Mini is the only carmaker that has series production vehicles built through contract production in the Netherlands. The vehicles will be distributed to global markets by the same outbound providers that serve the company’s Oxford plant. The move follows an announcement made in 2011.

“Mini is going to grow substantially and therefore we have been looking for external production capacity beyond Oxford’s maximum production capacity,” said a spokesperson for BMW. “BMW Group has agreed with VDL Nedcar to establish contract manufacturing as a satellite production close to its UK operations.”

The Nedcar plant will be building the vehicles from the ground up as the plant is fully equipped with press, body and paint shops, as well as full assembly equipment.

A spokesperson for BMW said that production will be supplied by the same tier companies that feed production at the Oxford plant in the UK and the same inbound transport providers will be serving both plants. More than 6,000 different parts are supplied for the production of each Mini. The Oxford plant also makes the Hatch, along with the Convertible, Clubman, Clubvan, Roadster and Coupé versions.

According BMW it is stepping up the brand’s presence in the Netherlands. The carmaker said the move to the Nedcar plant will bring benefits in terms of logistics and its proximity to the UK Mini production sites – namely the Oxford plant, the subassembly plant in Swindon and the engine plant at Hams Hall.

According to the German carmaker it needs extra capacity for Mini production, which stands at about 260,000 units per year. The Nedcar factory has a total capacity for production of around 200,000 cars per year.

The move to split production will also give BMW greater flexibility for other models across the 29 production sites that it operates according to the company.

“Contract production is a vital flexibility tool for us, and our experience gathered over the past ten years has been nothing but positive,” said Dr Andreas Wendt, director of the BMW Group’s Regensburg plant. “Splitting production of the new Mini Hatch between Oxford and Born will give our global production network additional leeway.”

VDL Groep consists of 84 operating companies focused on the development, production and sale of semi-finished and finished vehicles, as well as the assembly of cars.