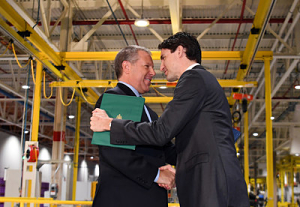 Ford has announced a C$500m ($373m) research and development (R&D) investment in Canada’s Ontario territory, including the development of a research and engineering centre in the capital of Ottawa.

Ontario Premier Kathleen Wynne and Prime Minister Justin Trudeau (pictured here on the right), were both present at the official event announcing the investment, held at the carmaker’s Windsor plant on March 30th.

An additional 400 engineers (300 based in Canada) have been recruited as part of the R&D investment, more than doubling the company’s mobile connectivity engineering team.

According to a Ford spokesperson, the new recruits are former Blackberry mobile software and handset employees with extensive experience of working with the QNX-based software modules behind Ford’s SYNC 3 infotainment and connectivity platform.

Brad Duguid, Ontario’s minister of economic development and growth, said: “Technology and innovation never stand still, so it’s essential that Ontario’s auto sector keeps driving ahead to remain globally competitive. Ford is a cornerstone of our sector and is dedicated to research and development.

“With this substantial partnership, the company and provincial and federal governments are joining forces to ensure Ford will remain a leader in building the vehicles of tomorrow – right here in Ontario.”

According to a Transparency Market Research study, the global connected car market will reach $131 billion by 2019, with an annual growth rate of 30% a year.

Ford has an ambitious plan to equip 20m of its cars globally with built-in modems in the next five years.

The latest investment in the sector follows General Motors’ announcement last year that it would expand its Canadian R&D footprint with the launch of its Software Development Centre in Markham, Ontario.

In December, Blackberry QNX announced a $100m investment in its own autonomous vehicle innovation centre in Ottawa.

Areas of focusFord says its research and engineering centre will focus on research and development across infotainment, in-vehicle modems, gateway modules, driver-assist features and autonomous vehicles. The company says it will serve global connectivity needs for Ford.

Joe Hinrichs, president of the Americas for Ford (picture above on the left), said: “Canada has reinforced its position in Ford’s global operations as the company shifts to lead as both an auto and mobility company.”

Ontario is well positioned for the connected car, given that it boasts the second largest IT cluster in North America after Silicon Valley in California, and over the last five years it has produced more cars than any other state or province in North America, accounting for 15% of all production.

Chrysler, Ford, GM, Honda and Toyota run 12 plants in Ontario, with a total of 2.36m vehicles produced there in 2016.

Part of the R&D investment includes research at Ford’s existing Windsor and Oakville Operations in Ontario, where the company will increase capacity in sustainability and fuel efficiency research.

Ontario has also been supporting innovation in the transport sector by launching the first automated vehicle (AV) pilot programme in Canada at the beginning of last year.

In addition, smart infrastructure projects like the Gordie Howe International Bridge will be equipped with smart technology for connected and autonomous vehicles and will create an additional link between Windsor and Detroit, the busiest border crossing between Canada and the US.

Ontario has also been investing in its highways and bridges to keep them in good repair, reduce congestion, improve safety and promote the economy, spending over C$2.1 billion on such improvements during the 2016/2017 fiscal year.

On March 28th, Ford announced it was investing $1.2 billion in three Michigan manufacturing facilities specifically for the production of trucks and SUVs, as well as to support its move to become an auto and mobility company.

Of the total investment in Michigan, the company plans to invest $200m for an advanced data centre. It is the second of two new data centres Ford is building in Michigan, as the company expects its data usage to increase 1,000%, driven by manufacturing and business needs and new mobility services, such as more connected, autonomous and electrified vehicles.

The company also said $850m would be invested in its Michigan assembly plant to retool it to build the all-new Ford Ranger and Ford Bronco.

Ford also plans to create or retain 130 jobs and invest $150m to expand capacity for engine components for several vehicles, including Ranger and Bronco, at the Romeo Engine Plant in Michigan.