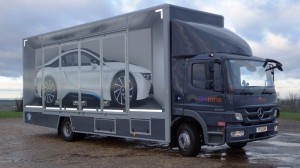 BMW has chosen Ontime Automotive, Europe’s largest enclosed car delivery operator, to transport its hybrid BMW i8 around the UK.

According to Ontime Automotive, BMW chose it because the company owns the only electric hybrid transporter in the UK, providing transport parity with the plug-in hybrid sports car.

Ontime specialises in the movement of classic cars and prestige vehicles, offering covered car transport worldwide. The company’s fleet of transporters caters for all kinds of cars including low profile sports and racing cars as well as non-running and restoration vehicles.

The BMW i8 has made an appearance at the recent BMW PGA Golf Championship at Wentworth Club and also recently steered its way up the famous hill at the Goodwood Festival of Speed.

The BMW i8 uses a three-cylinder turbocharged petrol engine, with a 1.5-litre capacity, in conjunction with an electric motor.

Utilising both power sources enables the car to accelerate from zero to 62mph in 4.4 seconds, going on to an electronically limited top speed of 155mph. Fuel consumption stands at 135mpg and CO2 emissions come in at 49g/km.