Ovenden to replace Cannis as head of Ford Sollers 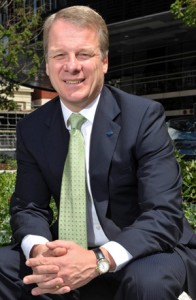 Ted Cannis is moving from his role as president and CEO of Ford’s joint venture with Sollers in Russia to take up a new role as executive director, Investor Relations at Ford, based in Dearborn in the US. He will be replaced in Russia by Mark Ovenden (pictured), who is currently chairman and managing director of Ford of Britain. Andy Barrett is being promoted to Ovenden’s role in the UK from his current role there as director of sales.

“I want to thank Ted Cannis for his leadership during a turbulent period in Russia,” said Jim Farley, chairman and CEO of Ford of Europe. “Under Ted’s leadership over the past four years, Ford Sollers significantly expanded and rejuvenated its vehicle line up, increased localisation of production, and modernised and expanded its manufacturing operations. Ford Sollers is now well positioned to reach new customers and thrive as the market recovers.”

Cannis is replacing George Sharp in the investor relations role. Sharp is retiring after a 39-year career with Ford in which he held a number of key finance and strategy positions.

Cannis was named Ford Sollers’ first president and CEO in 2011. Prior to that he served as deputy general manager at the Ford Otosan joint venture in Turkey. From 2005 through 2009, Cannis was based in the US and held various executive marketing positions, previously having been president of Ford Argentina from 2002.

Mark Ovenden, meanwhile, is no stranger to Russia. He was president and managing director for Ford in Russia from 2008 to 2011. His previous roles have included director of marketing, Ford of Britain, as well as a wide a wide range of global marketing and sales positions within company, including positions based in Dearborn and Cologne.

Ovenden will be overseeing an increase in operations for Ford Sollers in Russia as the company contradicts the general trend amongst the majority of foreign carmakers in the depressed Russian market at the moment. In April this year Ford Sollers started production of the latest Ford Mondeo at its Vsevolozhsk plant near St Petersburg, the first of four new models being introduced to the market in 2015.

**Ted Cannis will remain a speaker at this year's Automotive Logistics Russia conference, which will be held June 23-24th in Moscow. See the event webpage here for more details.