Being Pragmatic about tracking 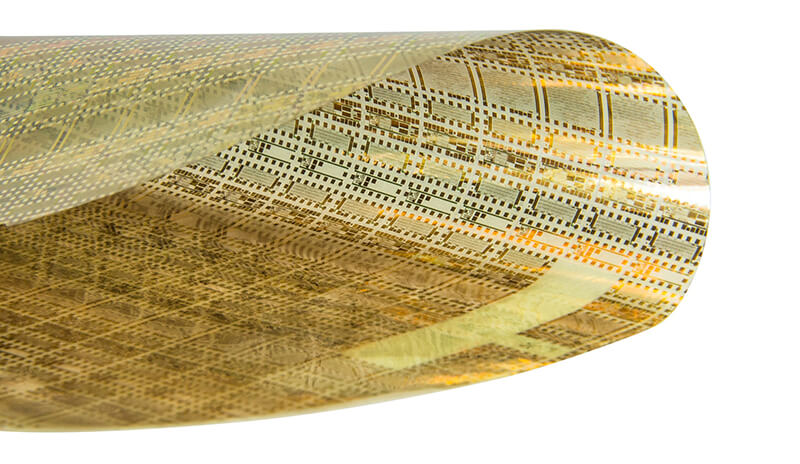 Assigning materials and components an individual identity that can be tracked easily and reliably from the goods-inward stage through production to delivery to the customer, and even throughout their lifespan, is a fundamental element of effective logistics. In a high-volume environment such as mainstream automotive manufacturing, this will mean that the goods themselves carry some device or code, often an RFID tag, that can be read by or communicate with external monitoring equipment that is integrated with a database.

But at least a few aspects of the conventional RFID approach can be problematic. One is that the electronic tags can still prove expensive when their numbers reach eight or nine figures. Another is that such tags, though very small, are made with a hard silicon substrate that can make them susceptible to impact damage and in some instances compromise the integrity of protective packaging.

So what if these limitations could be removed by way of goods, parts and packages carrying with them, instead, a flexible, ultra-thin tag that is cheaper than silicon but no less robust and requires no hard connection points?

That is the prospect held out by the FlexIC device that has now been brought to market after five years of development by a company called Pragmatic, based in Cambridge, UK. As CEO Scott White explains, neither the location nor indeed the name are incidental. The company has worked closely with the University of Cambridge to develop its product, which is based on nano-printing technology with origins elsewhere in UK academia, at the University of Manchester. Meanwhile, the name Pragmatic is intended to reflect the company’s common-sense approach to achieving its objectives of combining low product cost with – literally as well as metaphorically – flexibility of application. 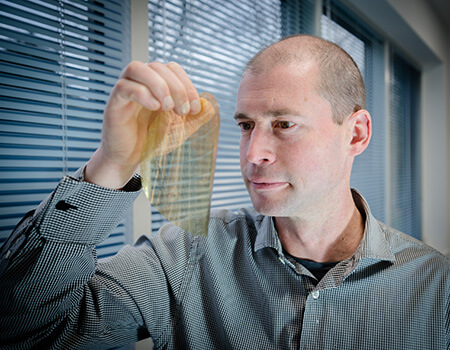 White: After five years of development, Pragmatic is now ramping up production

“We own all the IP,” White confirms. “We have been working with a number of customers in pilot projects for the last couple of years and for the last 12 months also focusing on ramping up our production levels.”

This last objective has recently passed a new threshold with the inauguration of a new manufacturing plant in Sedgefield, UK, where the company previously operated a prototype production facility. White says production processes will be so highly automated that only one person will be required to oversee their operation. When fully ramped up early next year, the factory will be capable of producing about one billion circuits per annum.

White does not reveal the capital cost of the new plant but says it is “orders of magnitude” less than that of a standard, silicon-based integrated circuit (IC) production facility. Investment by the company in all operations since its foundation in 2010 amounts to only £25m ($34.5m).

Outcompeting siliconThe key enabling factor of FlexIC, says White, is the flexible plastic substrate upon which a series of subsequent layers are mounted. These layers are composed of plastics, metals and metal oxides which, crucially, are also very thin so that the total thickness of the device is under ten microns. White points out that conventional silicon chips are generally about 600 microns thick and even when slimmed down for RFID applications they still tend to be around 120 microns deep.

However, the overall size of a FlexIC will depend on the application. The combination of low material cost and flexibility means that they can be made quite wide – “large, flat and flexible”, as White puts it – in order to facilitate both ease of handling and attachment. Typically, he says, a single device might be a few millimetres square if there is a need to incorporate an antenna for RFID purposes. He confirms that a FlexIC can be fixed in position using the same type of adhesives as for silicon chips and that they can be safely handled by conventional pick-and-place equipment.

[mpu_ad]According to White, the ease of antenna integration enabled by the large, flat format means that “we can make considerable savings in the overall tag cost structure”. The final per-device, in-use cost-saving compared with silicon counterparts is about 80%, according to White, who admits that even he was surprised by this figure when it emerged. Although other companies have certainly developed flexible ICs, White believes that they have all incurred a cost penalty compared with hard silicon: “As far as I am aware, we are the only ones to have solved the cost issue”. The devices are deemed comparable rather than superior to silicon devices in terms of performance. White says that, at the moment, Pragmatic’s claim is that it can supply devices “for comparatively simple applications” with considerable advantages in terms of cost and physical format.

With FlexIC technology now stable enough to be manufactured in volumes that make it commercially viable, Pragmatic is busy finding real-world applications. In fact, prototyping work with potential users means that the company “has been generating revenue for the last five years”, says White, but these activities have mainly been in the area of consumer goods. There are many ideas to explore, including some that would directly assist end users in innovative ways; in the food supply chain, one possibility is that FlexICs on packaging could carry recipe suggestions.

Work with one collaborator, Unilever, has progressed far enough down the logistical chain to involve suppliers of labelling and metal packaging. The advantages of FlexIC devices in this context are that their thin profile means they can be easily integrated with packaging in a way that does not cause unsightly distortions, while their pliability protects them against impact damage that brittle silicon devices might incur.

Finding applications in automotiveWhite is confident that the devices could find uses in other types of supply chain, including automotive. He confirms that Pragmatic has had discussions with manufacturing companies in the automotive sector and that several areas of congruence have been identified, the most obvious being that “techniques such as RFID and real-time location systems are already in use in the automotive industry”. Yet their application at the moment is generally confined to high-value parts, White explains, whereas the cost-effective FlexIC device opens up the possibility of broadening their use to “lower-value parts and consumables”, items which have as much potential to cause disruptions to production through misidentification as more valuable ones.

FlexICs might also prove useful, White suggests, as a means of communicating information for custom parts to automated systems, whether for manufacturing purposes or handling and storage. Not only would in-process inventory management be enhanced but so would the capability to trace and, if necessary, authenticate parts. The latter may prove particularly useful for the validation of components as genuine at a later point in a vehicle’s life, say for insurance purposes.

Furthermore, White argues that the combination of inexpensive but unobtrusive electronic tags and the “near-field communication” capabilities that are now frequently built into smartphones could be harnessed to empower drivers in the vehicle aftermarket. Not only might they be able to check the validity of replacement parts, but also the suitability of consumables such as oil for their particular vehicle. 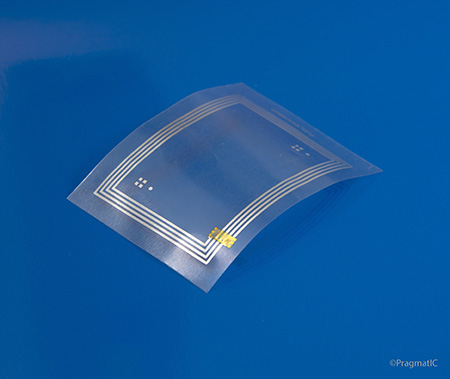 One factor which might inhibit the application of the devices on parts in use is simply that, being new, there is no track record of durability in the temperature extremes and vibration that a vehicle would present, but White sees no reason why they should not prove capable of surviving in such conditions. Indeed, he surmises that their flexibility and relatively large area for adhesion should, if anything, give them an advantage. Though contact between Pragmatic and the automotive industry is still at a very early stage, White says the sector is “firmly on the list” for further exploration.

The company will build on the work it has already carried out in the consumer sector and collaborate with the major RFID tag manufacturers to enable them to incorporate the device into their product lines. Pragmatic will also continue a project with microprocessor supplier Arm to develop a full 32-bit version. This may be a few years down the line but White is confident that it is technically feasible and will open up more sophisticated, demanding application areas for Pragmatic’s conveniently thin and flexible devices.

"As far as I am aware, we are the only ones to have solved the cost issue [of flexible circuits]." - Scott White, Pragmatic