Carmakers and suppliers collaborate on containers 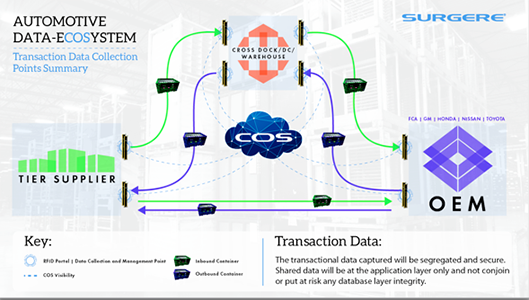 Honda, Toyota, GM, Nissan and Fiat Chrysler Automobiles (FCA) have joined forces with 12 medium to large tier suppliers, two logistics providers and the Automotive Industry Action Group (AIAG) on a data system providing accurate visibility over returnable containers at every stage of their movement between supplier and OEM.

The Automotive Data-Ecosystem, which uses data gathered from RFID tags on the containers and digital platform provided by a digital supply chain and packaging specialist Surgere, was announced at The Supply Chain Conference in Atlanta, Georgia, this week as an answer to the industry-wide problem of poor management of returnable containers.

Dana McBrien, associate chief advisor at Honda North America, was joined by Doug Adams, Toyota's general manager, and William Wappler, president and CEO of Surgere, to explain how the system was developed.

“We came together because we all had a common problem that is recognised by the industry: we don't manage our returnable containers very well,” confessed McBrien. “We have different levels of severity and problems, but it all comes down to not managing them very well. I don't think any of us have meetings with suppliers where this doesn't come up.”

Bad visibility over container location can cause delays in production and force OEMs and suppliers to use expendable or non-returnable alternatives.

Adams explained that the foundation was carried out very simply, with each company mapping out on a board the movement of containerised parts through the network from supplier to OEM, via warehouses and crossdocks.

The map indicates how, using the data gathered and the software to analyse it, everyone involved in the process can visualise packaging both for parts and for the movement of the returnables, using a common platform. “We now have the data to solve this problem of managing returnables,” confirmed Adams.

That is not all it does, however, he added. “We also defined how the system could operate for unique instances in our supply chain. We actually used Lego to visualise abnormal handling of returnables. By doing that, we could clearly understand how everybody operates in those sorts of situations and create the requirements the system needed to support it.”

The goal of the system is to get the right containers to the right place in the right numbers, the right configuration and in good condition, explained McBrien – and having the supplier base involved was a priority. According to McBrien, the point was to establish a single solution for the supply base so that parts-makers were not forced to use five different systems to handle containers for each carmaker.

“We didn't want to tear the supply base apart and we didn't want the tier ones to have multiple solutions that they were working through,” said McBrien. “We wanted a common solution so there were standards that were in a best business document that everyone could work from.”

Adams added that it was the tier suppliers involved that pushed for the use of RFID technology on the containers and the analysis of the data gathered.

“They were adamant about wanting to use RFID more than we were and were pushing us to use the data to solve the problem,” said Adams. “That was a good challenge. Now we have the data, we will be able to eventually hold one another accountable for a proper solution in the supply chain.”

The project to develop the system started from a conversation during the Automotive Logistics Global conference in Detroit last September.

“It goes back to that one conversation and the statement ‘what we recognise is that we all do the same thing’,” said Wappler. “That was the underpinning of the Automotive Data-Ecosystem. It started simple but the vision is we need more robust systems and a more meaningful commercial life. They embraced the technology and created something unique.”

McBrien said that no sensitive proprietary or monetary information was compromised during the project. He was also keen to stress that while a shared system did mean losing competitve advantage, how companies used the process would become the competitive advantage instead.

“Some will adopt it 100%, some will adopt a portion of it, but regardless of the adoption path, the output will be the same,” he added.

“It is still being developed a little bit but this isn't the end of it. This is the foundation to what can happen next, concluded McBrien.