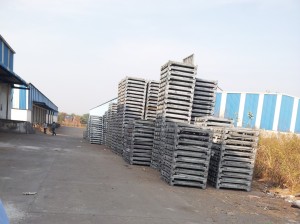 When Mahindra Sanyo Special Steel procured an order in 2010 from FAG for supply of 60 tonnes of rings per month from India to Hungary, dispatch was the critical issue. The buyer made it clear that it preferred to use returnable packaging – palettes and bins – rather than disposable material. That was when Raju Kadekar, senior general manager of operations at the rings division, discovered GDPK Returnable Solutions India (Goodpack), a fully owned subsidiary of the Singapore-headquartered returnable container specialist.

Luckily, both the price and product sounded right to the Indian steel major. Compared to a wooden box, Mahindra Sanyo is paying substantially less on a returnable basis for Goodpack’s intermediate bulk containers (IBC). Kadekar also points to lower damage and higher visibility thanks to RFID scanning being used to track each bin’s arrival and dispatch. While the company is currently using 30-40 Goodpack bins per month, this is expected to grow as Mahindra Sanyo captures more market share.

Goodpack, which controls a huge fleet of IBCs globally, is relatively new to the automotive vertical in India. However, it started in the country in 2007, making big gains in the Indian rubber and irrigation sectors by convincing them to switch from wooden drums to its metal boxes. Today, every single tyre producer in India works with Goodpack, says India-based Kuna Kunasekaran, director of South Asia and the  Middle East for the company. 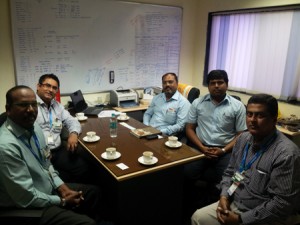 The automotive business began with several trials of Indian aluminium and casting supplier Sundaram-Clayton and other tier suppliers, which eventually led to approval and use among carmakers. Today, automotive accounts for just 6% of Goodpack’s business in India, however Debabrata Bhattacharjee, general manager (India Sub-Continent) is confident the share will rise to around 30% over the next two years thanks to increasing concern for environmental issues and regulation, as well as the rising influence of supply chain executives. “It’s not just about cost, cost, cost anymore, but sensible and sustainable costing,” adds Bhattacharjee.

Globally, Goodpack is in expansion mode. Recently, global private equity giant Kohlberg Kravis Roberts (KKR) took a controlling interest, with ‘aggressive growth’ on the agenda, particularly for the automotive industry. Following customer feedback, Goodpack gave its conventional MB5 boxes a makeover to suit the automotive industry. The result was the MB5H, which has a half-door on one side for easy pick or place operation. “MB5H is the most sought after item among Indian auto OEMs,” says Kunasekaran.

With Kunasekaran’s push, India is a major market target. Mahindra, Tata Motors and Hyundai are some of the prominent Goodpack clients here. While the company’s main focus has been on knockdown kit exports, it is now targeting the domestic supply chain. Automotive growth in India is not coming easy, however. The company faces resistance among some manufacturers to convert to returnables, partly out of fear of higher cost and handling, but also because many suppliers in India simply don’t have the plant or warehouse infrastructure to handle Goodpack equipment.

Ultimately, Goodpack proposes to its clients a total logistics solution for moving containers rather than just equipment. Like returnable packaging provider Chep (which is not in the returnable bin business in India), the company handles the transport of its equipment to and from client sites, allowing them to rent IBCs only while they are in use (although clients can also handle their own reverse logistics depending on the terms of the lease). Clients also have options to use equipment with fixed delivery and collection locations, or those that vary.

"We are very mindful of the character of the business of our potential customers. We cannot just knock on doors and waste time. We pick and choose customers... where there is a value proposition to both [parties]" - Kuna Kunasekaran, Goodpack India

When a customer is signed up, they are asked to submit a six-month projection, including a three-month definite plan, and a month’s projections for delivery at customer-specified sites. Once the IBCs reach the customer’s premises, the meter begins to tick. Goodpack tracks the equipment by RFID until the client notifies ‘de-hire’ online, signalling Goodpack to collect and retrieve the equipment.

As elsewhere in the world, Goodpack’s business in India depends upon being able to move bins as frequently as possible, as any idle equipment is a revenue loss. No bin is permitted to gather dust beyond 9-10 days in warehouses. RFID visibility allows Goodpack to shuffle the equipment quickly to needy zones around the world. “Move, move and move is the core principle,” explains Arindam Kar, head of operations in India.

As part of a total packaging approach, Goodpack has a dunnage engineer in India to help manufacturers with packing designs, and to improve cubic utilisation in Goodpack bins. “It is [a] high-tech business. No longer [a] simple dump, close and push it model,” says Bhattacharjee.

Goodpack offers flexible trials of its products to customers depending on their specific needs. However, the conversion rate in India is only 5%, compared to 20% in other countries, and 35% in the US. While it is usually the OEMs that approve the business, sometimes studies at the tier supplier level prevent implementation. One of the major issues is that many suppliers in India lack the forklifts or loading bays necessary to use the equipment. 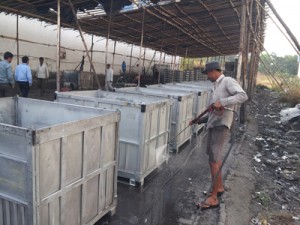 “Some really want our bins but they don’t have loading bays, which we cannot create for them,” Kunasekaran says. “Some tier ones tell us that they can’t use our product unless they were to build a new plant.”

In other cases, it is Goodpack that must be careful about the companies it chooses, depending on how many bins it would need to add into the network and where. Kunasekaran adds that some very heavy parts are also not effectively used in the bins. “We are very mindful of the character of the business of our potential customers,” he says. “We cannot just knock on doors and waste time. We pick and choose customers... where there is a value proposition to both [parties].”

Despite the challenges, Kunasekaran believes the company is on the right track in India, and he expects to increase the current worker headcount. Part of Goodpack’s growth strategy will also be to manufacture more equipment locally, as bins are currently built in Thailand and China, where the cost of manufacturing them is $15 cheaper per unit. But the company is now exploring local production in India, including for the half-door of the MB5H, which is currently swapped onto MB5s in India after they are imported from China.

On the other hand, Kunasekaran is not expecting to appeal to all manufacturers in India. Rather, the company is working with a number of global suppliers here, including Magna, Honeywell and Cummins, and he wants to continue in this direction. “We want to go with elite companies. We consider our product as a premium product with a premium customer,” he says.

Correction - An earlier version of this story misspelled the name of Goodpack's investing company. It is Kohlberg Kravis Roberts (KKR), not Kohl, Kravis and Roberts