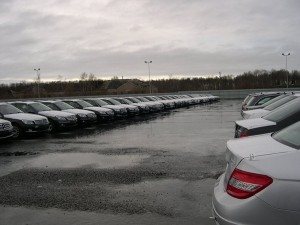 German optimisation software provider Inform has implemented its SyncroTESS system for vehicle distribution at the vehicle terminal of Paldiski Northern Port in Estonia. The technology is being used to organise the movement of new vehicles through the terminal.

Paldiski Northern Port is a major import route for vehicles into Russia and Eastern Europe. The port has parking capacity for 15,000 vehicles and its 16-hectare terminal in the port’s free zone will use SyncroTESS intelligent software to optimise the handling processes and allocation of the best parking position for each vehicle. The terminal is able to load 250 car carriers a day and and two full trains each with 45 specialised railway wagons for onward distribution.

"As one of the most important handling locations between the markets in Russia and the EU these requirements are decisive for our terminal,” said Aleksandr Kovaljov, member of the board at Paldiski Northern Port. “That is why, with the implementation of SyncroTESS, we have opted for a solution which satisfies the high demands of car manufacturers.”

Kovaljov went on to say that the software has allowed the port to increase the handling capacity at the terminal while allowing the processing to be managed efficiently with the status of each car made visible at any time. In 2014 the port expects to handle up to 100,000 cars.

The SyncroTESS system receives vehicle data and transit requirements with which is organises each steps in the handling processes. It also arranges movement of vehicles that require inspection and washing to the workshop facility on site.

According to Inform this gives the terminal operator a real-time view of the current status and progress of all vehicles on the terminal, from vessel unloading, through vehicle movements inside the yard to truck loading.
The project at Paldiski started in early January 2014 and is now in full operation.

"With SyncroTESS we have implemented a system for Paldiski Northern Port, which enables the terminal to automate their vehicle handling,” said Matthias Berlit, vice-president, Manufacturing Logistics Division at Inform." In real time the software offers comprehensive visibility and supplies information regarding the location and status of each vehicle on the site."

There are five berths in the Paldiski Northern Port making it possible to receive vessels with a length up to 310 meters and a draft up to 12.5 meters.