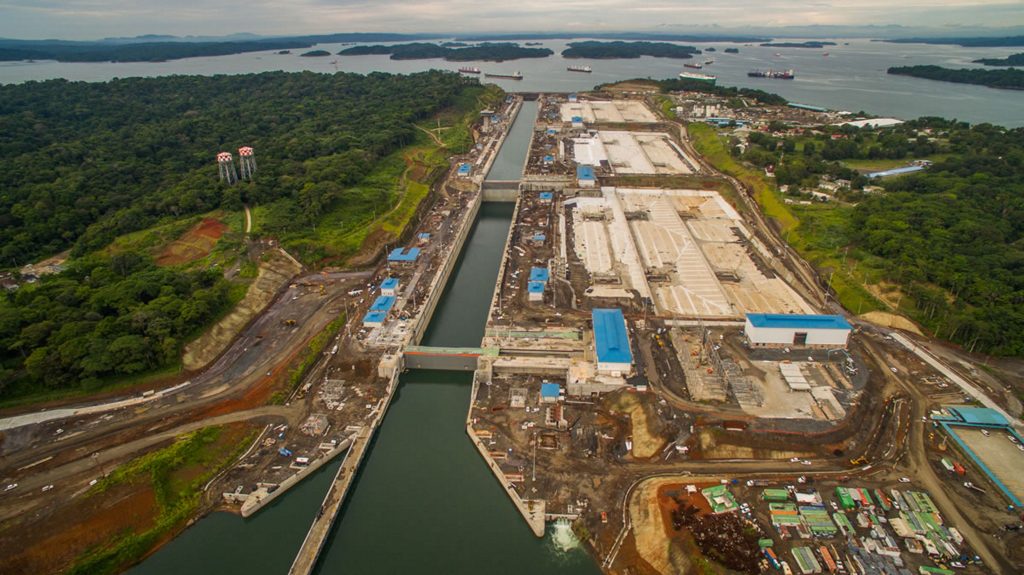 After nine years of anticipation, the newly expanded Panama Canal is set to open to commercial traffic. Charlie Fiveash considers the implications for vehicle shipping

Next week, the Panama Canal is poised to welcome the first commercial customer along its new expanded route. The container ship, COSCO China, was set to traverse the Isthmus of Panama along the upgraded 48-mile (77km) waterway on June 26th. Not far behind, the second ship slated to pass through the new canal route when it opened was a ro-ro vessel – Wallenius Wilhelmsen Logistics’ Thalatta.

After nine years of expansion work (during which the original canal has remained open) and an estimated $5.25 billion in investment, the route now has six new locks that can handle post-panamax vessels up to 366 metres (1,200ft) long and 49 metres wide.

“The anticipated hour is here – it’s a significant landmark in maritime history,” says John Wallace who, as well as being director of the Panama Gateway International Association, a trade group advocacy that fosters trade between the Americas, also happens to have the same name as the canal’s first American engineer. “The expanded lane connecting North and South American global trade with the rest of the world will be worth the wait,” he pledged.

Since its inception, the Panama Canal Authority has operated a complex system of calculating tolls for commercial vessels that has included some discount based on volume, but with the opening of the expanded canal comes a correspondingly revamped toll structure.

“After working in close co-operation with our partners in the maritime industry, I am pleased we will be able to provide a more bespoke pricing solution for our customers; one that recognises their various needs and requests, while still appreciating the value and reliability provided by the route,” says Panama Canal Authority chief executive Jorge Quijano.

For PCTCs, the revised cost structure is between $3.50 and $4.50 per vehicle under the new toll system. For a fully loaded 6,000-car-equivalent-unit vessel, the unit cost is $4.43 per vehicle. A discount applies if a loaded vessel returns to complete its round trip voyage within 60 days. There is also a loyalty programme for consistent users and a discount for fully laden vessels.

“The width of the new canal is certainly a game-changer for all,” agrees Ray Fitzgerald, president of the Atlantic region for global ro-ro and logistics provider Wallenius Wilhelmsen Logistics (WWL).

The international shipping industry has long anticipated the opening, with port operators investing in infrastructure improvements to maximise its benefits. As many as ten deep-water ports along the US eastern seaboard have initiated or completed terminal improvements, for example, to prepare for the larger cargo ships that can now travel the canal.

“The port of Baltimore is ready, and we’re excited,” confirms Richard Scher, a spokesman for the Maryland Port Administration. “Baltimore is one of three ports on the eastern seaboard that has the port depths to handle the super-sized ships carrying containers, high-and-heavy equipment and autos. Our new berth, built in a public-private partnership with Ports America, enables the port of Baltimore to reach one of the wealthiest and largest US auto-trading markets.”

Still too small?The canal’s expansion was driven, in part, by a need to keep pace with the swelling scale of modern vessels. However, the new locks will not be able to accommodate today’s mega-container vessels of over 14,000 TEUs. “The sweet-spot for the canal today is the 7,000-10,000 TEU vessels – the workhorse ships,” confirms Curtis Spencer, president of Texas-based maritime consultancy IMS Worldwide.

In the pure-car-and-truck-carrier (PCTC) sector, ship sizes are not expanding at the same accelerated rate and will not be limited by the Panama Canal’s new lock systems. Typically, PCTCs are around two-thirds the size of the mega-ships delivering containers today. “For the PCTC sector, the increased draft of the new canal is not as significant as it will be for other sectors,” says WWL’s Fitzgerald.

Nonetheless, the concept of larger ships in the PCTC sector is also emerging. WWL, for example, has been taking delivery of so-called HERO (high efficiency ro-ro) vessels. “With a beam of 135ft, the larger HERO vessels offer 710,000 sq.ft (66,000 sq.m) of deck capacity, accommodating the equivalent of 8,000 vehicles,” Fitzgerald says. By the end of 2017, WWL will have eight such vessels deployed in its fleet.

Other shipping lines, including Höegh Autoliners and NYK, have also taken ownership of vessels with capacity for 8,000 vehicles or more. 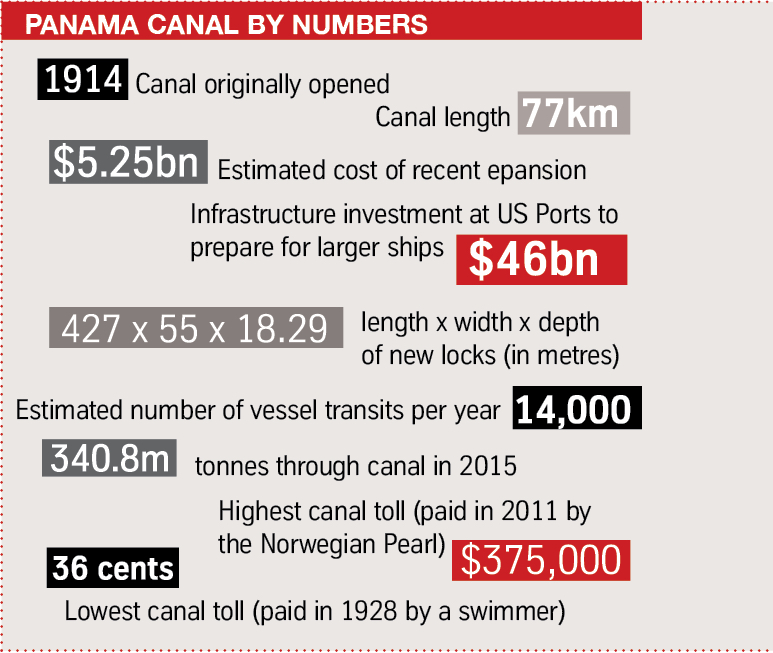 Despite PCTC vessels increasing in scale, however, neither their size nor North American port capacity look like a real problem yet. “In contrast to the container ship sector, we don’t see any infrastructure constraints that would restrict post-panamax car carriers from calling at US east coast ports,” says Niklas Carlen, research director of Maritime Strategies International (MSI).

Even in fast-growing Mexico, whose ports struggle to handle larger container ships, ro-ro vessels should have no issues calling at Veracruz, the country’s largest port. “Our HERO-design vessels can easily call at the Gulf coast ports without restriction,” says Ray Fitzgerald.

Economists continue to debate the effects that the expanded canal will have on global trade, particularly in terms of what new trade lanes might open, which ports are really prepared and who the winners and losers will be once the canal’s new locks are fully operational.

“My hope is that the expanded canal will improve vessel velocity between the Americas to and from Asia,” says Don Asdell, vice-president and chief commercial officer at International Auto Processors (IAP) of Brunswick, Georgia. “In the past, it was common for manufacturers to import autos from Asia to the west coast and then rail the vehicles across North America. Now, the norm is to maximise efficiencies by discharging vehicles in strategic distribution areas.”

With additional capacity and volume as a result of the new canal route, it remains to be seen what the full impact will be of the shorter shipping route on the global supply chain – and specifically automotive distribution channels.

“The west coast is already losing cargo volume to the east coast and the new canal will increase competition between ports,” Asdell comments. “For ro-ro, the opening will only help improve the ocean transit times and service to and from the US east coast and Asia.”

That would be important not only for the main flow of vehicles from Japan and South Korea, but potentially for future trade between the US and China. “Auto imports from China are also expected to increase with both Volvo and GM importing China-made vehicles into the US. Chinese automakers also desire to import more auto volume into the US,” says Asdell.

There is also a question about what happens to small- and mid-size ships as vessel sizes increase. Smaller ships in maritime fleets are often displaced in a cascade effect as larger ones are integrated into global operations. “The post-panamax revolution in the PCTC sector won’t happen overnight, but there are currently 34 wide-beam post-panamax ships in the active fleet – with another 44 on order,” Carlen says. 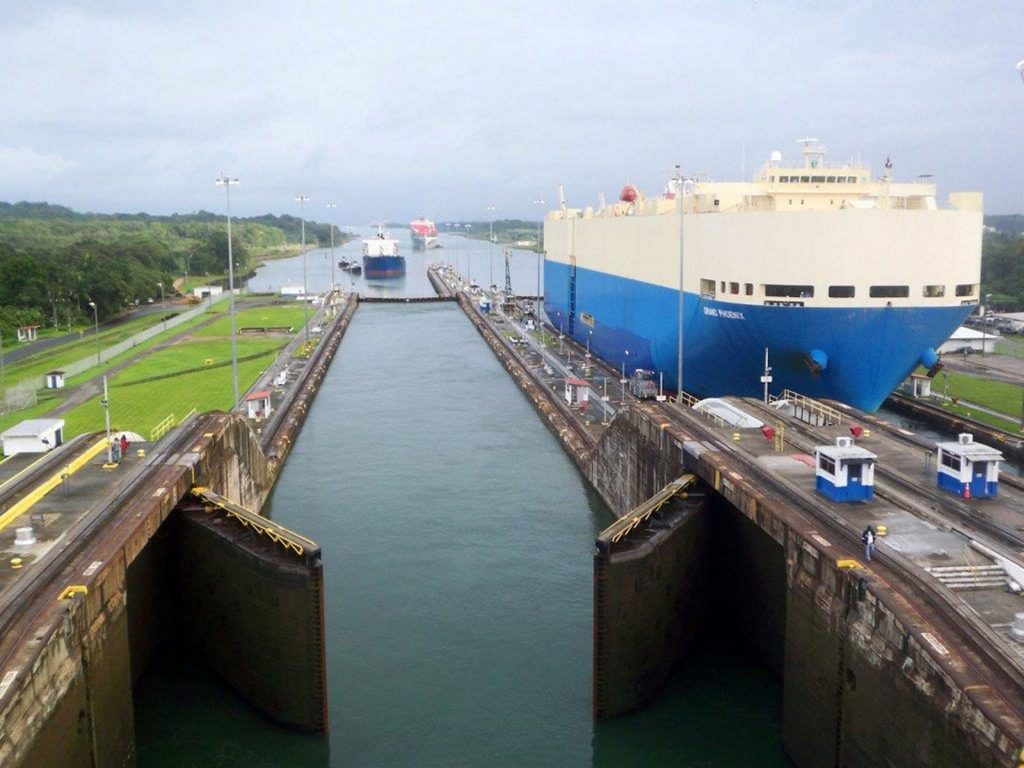 “In normal conditions, we would expect these small to mid-size vessels to find a home in secondary trade lanes like the Middle East, Africa and South America,” he continues. “The intra-regional trade markets, like Asia and Europe, typically support the smaller ships. However, [emerging] markets have underperformed in recent quarters, while the mature market trade lanes are improving. As a result, more than 20 mid-size car-carrying vessels are idle and awaiting redeployment.”

Other factors could minimise the benefits of the new canal route’s near-term boost to business and faster transit times. Softening trade volumes between China and the West, for instance, have already led to declines in the shipping sector, while extended transit times that result from slow-steaming and vessel over-supply in the container ship sector could reduce the effects of the upgrade.

“With larger ships and lean operating guidance to conserve fuel, a transit route may take 10 or 11 days longer due to slow-steaming,” says Curtis Spencer. “The anticipated volumes and transit times of the canal’s opening could [therefore] be insignificant in the short term.”

As the curtain is finally lifted on the expanded canal route, the debate continues on vessel size, ship deployment and port capacity in some ports. But it’s not all about port depths, new terminal berths and channel locks. “The new canal is not just about capacity, but about connectivity,” stresses John Wallace.

Given that, most agree that the expanded canal can only be a positive thing. As Ray Fitzgerald puts it: “We can say without question that opening of the newly expanded Panama Canal will have an immediate, as well as a long-term, beneficial impact on the world, the country of Panama, the shipping industry in general, and in expanding global trade.”

Not bad for a 48-mile stretch of water.

History in the making 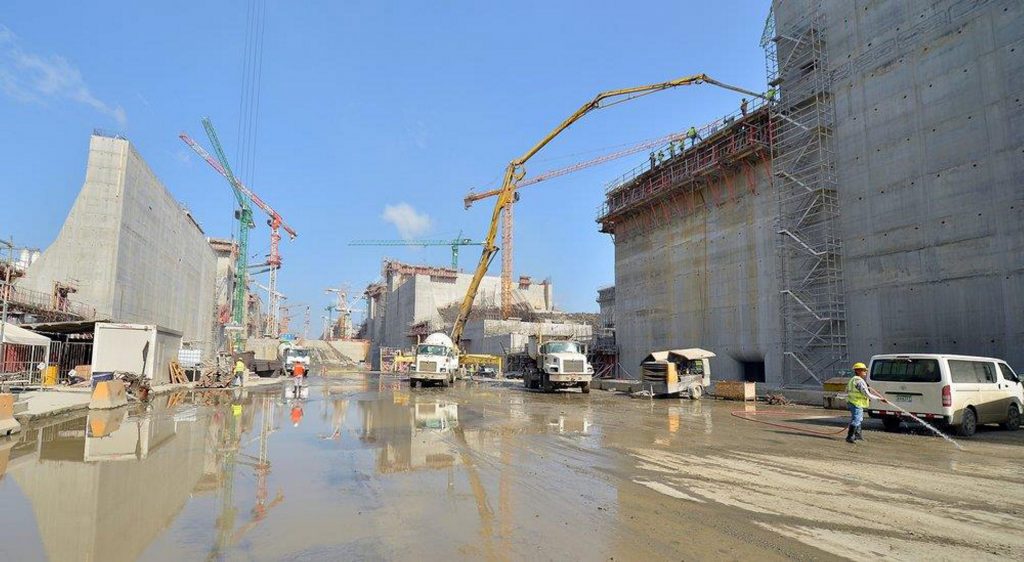 The idea of the Panama Canal dates back to 1531, when Spanish explorer Vasco Nunez de Balboa recommended a canal could be built across the Isthmus of Panama. It was France, however, that eventually broke ground in 1881. The French encountered engineering issues and an extremely high mortality rate among canal workers, as an estimated 22,000 lost their lives to malaria, yellow fever, snake bites and unsafe construction practices.

The US took over the reins of construction in 1904 and encountered similar challenges and widespread casualties before the canal eventually opened in August 1914.

Six decades later, the Torrijos-Carter Treaties provided for a transfer of ownership and operation from the US to the Panamanian government. The controversial decision by the administration of Jimmy Carter in 1977 to relinquish control of the canal to Panama passed the US Senate by just a single vote. After a two-decade period of joint management between the US and Panama, complete control was assumed by the Panama Canal Authority in 2000.

Though political turmoil plagued Panama after the controversial transfer of ownership began – not least in 1989, when rogue Panamanian general Manuel Noriega was deposed by US military forces and removed from office for cocaine trafficking and racketeering – the canal and its operations have continued to run without major incident, except for its closure during the military operation in 1989 and a further 17-hour closure in December 2010 following record-breaking rainfall.

In future, the canal may face competition. To address vessel scale growth and future global shipping demand, the Nicaraguan government signed a $40 billion agreement in 2013 with a Chinese contractor to consider the feasibility of a canal route there, too. Interestingly, the engineers in 1800s originally favoured Nicaragua for a Central American canal location but the high threat of volcanic activity in the region pushed the location further south.

Thus far, there are few signs of the new canal coming to fruition anytime soon.