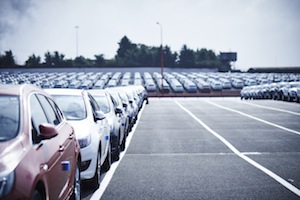 UK finished vehicle logistics provider Paragon Automotive has rolled out an RFID system at the car handling facility it manages near the port of Immingham, which it expects to result in “significant cost savings and service-enhancing benefits”.

As mentioned at the official launch of the facility in January this year, Paragon Automotive is using RFID technology to track Kia vehicles through the 35-hectare facility in Stallingborough, outside Grimsby. RFID tags are attached to each vehicle as they come off the car transporter vessels and matched to Kia’s factory barcode. They are also linked to the vehicle record in Paragon’s Evolution system. Each vehicle’s identity and location is registered remotely via a gate reader at the entrance to the facility.

On site, when a vehicle is recognised by its RFID tag, the system determines the location, status and workflow for it. Elsewhere on site, RFID technology allows entire transporters to be scanned in order to confirm load contents and dispatches, something the company said offered significant labour saving benefits.

The company developed the Evolution system in-house and according to Mark Hindley, Paragon’s group sales and marketing director, the technology is providing it with greater visibility of vehicles going through various processing stages, including the ability to differentiate sold vehicles from stock vehicles.

Chris Higgins, group IT director at Paragon, added: “We are always looking for ways to work smarter. RFID was one such technology that has been developing for a number of years and it was a case of waiting for the performance to meet our requirements.”

He said the company had now integrated RFID deep into its system and business processes and was already seeing improvements in stock control and compound management.

“The power is not really in the RFID technology itself, but rather in the real-time data it generates and the unique ways we are making use of that within our central Evolution IT platform, along with new-generation and mobile devices to make us smarter and more efficient,” said Higgins.

Paragon said it would apply the system to its other locations in the UK in due course.