Pasha begins operations at the port of San Francisco 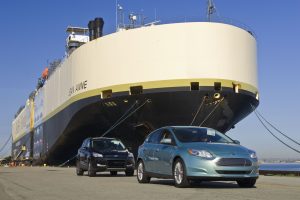 Following the signing of a 15-year lease agreement with the port of San Francisco, Pasha Automotive Services (PAS) has handled its first batch of vehicles through Pier 80, the port’s 28-hectare cargo terminal.

The first load of 500 units, which included Ford Mustangs among other vehicles and brands, was delivered by Pasha’s ro-ro vessel Jean Anne on Monday (August 22nd), which had sailed from Honolulu, Hawaii. The ex-lease vehicles were unloaded for onward delivery by truck to dealers in northern California. They were being moved for rental companies Enterprise Rent-A-Car and Hertz.

Having been an underused terminal in the past, PAS now expects Pier 80 to handle around 96 ro-ro vessels a year with a throughput of 150,000 vehicles as operations ramp up. The company is also able to handle project and breakbulk cargo through the terminal, and in fact did so in the first call on Monday, delivering yachts for the Pacific Cup Race alongside the cars.

“This was a special inducement call for the Jean Anne, which coincided with our launch of the Pier 80 facility,” said a spokesperson for PAS.

On the US west coast, PAS also currently operates car-handling terminals at the ports of San Diego and Grays Harbor.

US auto sales hit a record high of 17.4m in 2015 and, while there will be a temporary drop to 16.5m in 2018, according to figures from market analyst IHS Autofacts, sales are expected to increase toward 18m by 2020, a fact not lost on Pasha.

“This increased capacity will allow us to serve the Northern California market and reduce the environmental footprint of cars being unloaded in Southern California and trucked north,” said the spokesperson for PAS. “We are delighted to offer customers additional options for their roll-on/roll-off cargo at this key shipping hub and look forward to partnering with the port and the city in future growth.”

According to the port, Pier 80 will provide jobs for 50 longshore workers during vessel operations and as vehicle processing reaches capacity, it is anticipated that 150 additional employees will be hired and trained.

Pasha has entered into an agreement with CityBuild, an employment programme under the Mayor’s Office of Economic and Workforce Development, which will provide a screened and qualified workforce comprised of skilled San Francisco residents for processing work at the Pier 80 operation, with priority for residents in District 10.

“This is an exciting day for our company and our family,” said John Pasha, senior vice-president of PAS, at the launch of the Pier 80 services. “Not only are we returning to our roots in San Francisco, but we are transforming this underutilized pier to a facility requiring a maritime use to serve customers and create local jobs.”

Read more about developments at San Francisco port and the development of vehicle ro-ro at ports across North America as volumes increase in the full conference report from FVL Import Export, which was held in Baltimore earlier in August.