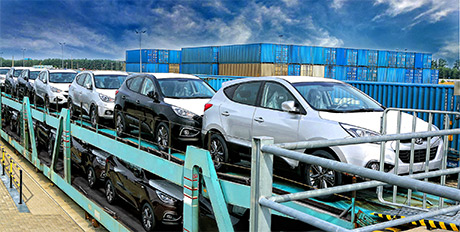 Cargo movements between Poland and Russia have been suspended this week because of an impasse between the two countries on the renewal of an existing agreement on permits. The permits allow Polish trucks to carry freight into Russia via Belarus, which is part of the Russian Customs Union. On Tuesday (February 1st), drivers from Poland attempting to enter Russia via this route were prevented from doing so.

The dispute concerns the fact that Russia has increased the penalties for violation of the permits, while at the same time having reduced the number of permits available for Polish hauliers. At the same time it is requesting an unlimited number of transit permissions for Russian trucks, which make comparatively fewer journeys into Poland.

There have already been two rounds of negotiations designed to settle the dispute – in Poland in December, and in Russia in January.

Szmit was quoted in the news source ‘Ukraine Today’ as saying that hauliers were being stopped in both directions across the Polish-Russian border.

“We asked Russia to let our drivers already there to be allowed to stay until February 15th,” he told the news source. “Of course we proposed the same solution for Russian drivers. It seems to be strange that we ensure their way back home. But in the past, Russia had stopped our carriers for many weeks, in our experience."

The suspension of services between Poland and Russia (via Belarus) was confirmed by Polish transport and logistics provider Adampol. Its deputy sales director for key accounts, Krzysztof Szeligowski, told Automotive Logistics that truck traffic had come to a standstill because of the disagreement between the two countries.

Russia changed its internal rules for foreign carriers and is threatening almost all loads, given that many pass through countries other than Poland or Russia. This is against WTO rules and the bilateral agreements established in 1996, according to Szeliegowski.

Disputes over haulage licences between Poland and Russia have been going on for years. Back in 2012, Russia cut permits for haulage and implemented steep fines for invalid ones in an effort to protect domestic transport providers.

That followed a stalemate in 2011 that resulted in a total blockade on Polish truck movements into Russia through Belarus. That blockade hit automotive parts and finished vehicle shipments, causing costly delivery delays in both directions and leading many to ship under fraudulent documentation.