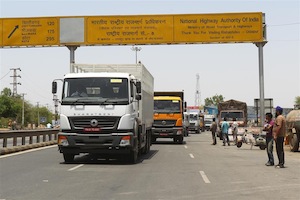 Poor vehicle sales have contributed to a bleak economic situation for India’s trucking market, as many carriers – including vehicle hauliers – are being forced to sell off portions of their fleet as many switch into “survival mode” during an industry downturn.

Truck carriers have been hit with something of a perfect storm of declining industrial output, weak consumer spending, and rising fuel and operating costs. For vehicle hauliers, the industry is seeing a decline in passenger vehicle sales of around 5% this year following a decade of growth. Poor sales for India’s commercial vehicle markets, which is the world’s third largest, are another sign of both weak demand for the logistics industry, as well as carriers’ efforts to trim fleet capacity. According to SIAM, sales of commercial vehicles during April-November experienced a decline of 17.5% compared to the same period last year. Medium and heavy commercial vehicles also witnessed a drop of 26.8%, while light commercial vehicle sales fell by 12.5%.

Added to this, the price of fuel has increased by more than 25%, according to Bill Villalon, vice-president for global automotive at APL Logistics, which recently started a joint venture in India with Vascor. Smaller carriers – which make up 75% of the Indian road haulier market, according to the Wall Street Journal – have been the worst hit.

Road tolls and equipment costs are also contributing to the depletion of India’s trucking market. According to the same Wall Street Journal report, the cost of new tyres has increased by up to 20,000 rupees ($322), to take one example.

Speaking at last week’s Automotive Logistics India conference in Pune, Tata’s head of vehicle logistics, Prem Verma, pointed to signs that carriers were suffering. “Many are switching to survival mode,” he said. “If you talk to them about preparing for 2020, they will say that today is what matters more.”

Hope also appears to be fading that the industry will get some relief from the government in the form of stimulus measures before the general elections are called in 2014. “Earlier forecasts had been expecting some sort of stimulus measures from the government to encourage sales, but now we don’t expect anything to happen for the next for four months or so,” said Rajiv Bajaj of Roland Berger Strategy Consultants.

Looking further out, however, the industry could see much of its losses reversed fairly quickly. Bajaj said that Roland Berger’s current forecast see a return to growth of 5-7% in passenger vehicle sales in the 2014-2015 financial year, while sales should rise by an average of about 9% a year until 2020, reaching 5m units. Commercial vehicle sales are also expected to grow at a similar rate.

Last week’s conference offered some hope for reducing costs and making better use of expensive assets – at least in the future. With the decline in demand for new vehicles across India, there has been a greater risk of accruing empty kilometres across the supply chain, as carriers transport half-full containers or trailers. Bill Pawluk, whose company Convertible Trailer Manufacturers (CTM) builds trailers that can convert between carrying vehicles and general cargo, suggested that such equipment could be useful in the Indian context, where the majority of cargo moves by road.

The overall vehicle logistics market in India could also be on the verge of increasing efficiency with the use of more rail transport. Villalon revealed that APL-Vascor is currently building a fleet of new, double-decker rail wagons for the Indian market.

The full impact of growth of automotive rail in India is not yet entirely clear for Indian car hauliers. A shift of vehicles moved off of long-distance road transport and onto to rail could help carriers to avoid long, empty returns, particularly to remote regions or from ports. However, the loss of cargo and market share could be yet another cause for concern for India’s beleaguered car haulier sector.