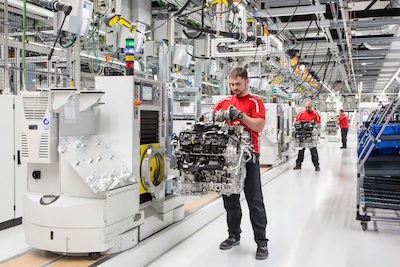 German luxury carmaker Porsche has opened an engine facility at its main site at Stuttgart-Zuffenhausen in Germany that will use the latest production and line-side logistics technology.

It represents a further investment in the plant of €80m ($89m). Porsche has invested more than €300m so far in the site.

The 10,000 sq.m facility, which is divided into two levels with logistics on the ground floor and engine production on the second, will make eight-cylinder engines in a newly developed area of the plant that covers 25,000 sq.m. That means there is room for expansion and Porsche plans to do that for the production of electric drives at some point in the future.

The company said a flexible production system supported by a skilled and responsive workforce were key to the engine facility’s function.

“We have already involved our team intensively in planning and have received over 450 ideas for the new plant,” said production and logistics director at Porsche, Albrecht Reimold. “These wishes and recommendations make a magnificent contribution towards workplace design, which benefits both product quality and working conditions.”

By way of example, Reimold pointed to the facility’s ergonomic assembly stations, which can be adjusted individually for each employee. He also said that to avoid monotony, the employees were involved in a large variety of work tasks and were trained in stages for the entire assembly process. “The ultimate goal is to have the workers attain mastery of the entire engine,” explained Reimold.

Porsche said approximately 100 innovations had been incorporated into the production system. One is the user-programmable, electric vehicles used to transport parts to the assembly line. The transporters, which are powered by lithium-titanate batteries, navigate over a grid network of 16,000 magnets mounted in the floor across the two plant levels.

“Their flexibility makes it possible to readily adapt production processes to potential product changes and new methods later on,” said the company in a statement.

The engines are being made initially for the Panamera sports saloon. As reported last week, Porsche’s Leipzig facility is now making the Panamera from scratch alongside the Macan SUV.