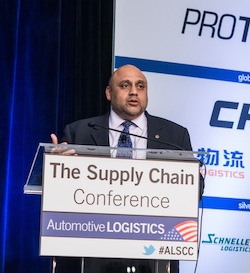 The space became available after Volkswagen opened a PDC earlier this year in northern California, near Sacramento, earlier this year, shifting nearly half of its parts inventory from the Ontario PDC to the new warehouse to allow for faster service in the north west.

Volkswagen announced last year that it was investing $6.8m in a more-than-13,000 sq.m (140,000 sq.ft) PDC near Sacramento to expand its service parts logistics operations in the region and Pacific north west.

That facility, which is being managed in-house by Volkswagen Group of America, began operations in March this year.

Speaking at last week’s Supply Chain Conference in Atlanta, Georgia, Anu Goel, vice-president of parts and vehicle logistics at the company (pictured), said that Volkswagen had moved 45% of its volume from its existing LA facility to Sacramento, which freed up space in its Ontario PDC, which had previously served the entire west coast.

“Our Porsche colleagues were five miles away,” said Goel. “So Porsche is now moving into the VW/Audi building in Ontario, CA. This worked out very well.”

In total, Porsche will lease around 143,665 sq.ft out of the total 330,000 sq.ft in Ontario, which will include warehousing Porsche Design of America in one of the current hazardous material rooms.

While the brands will be stored in the same warehouse, Porsche parts will be kept mostly separate. While Volkswagen and Audi parts operate on the same IT system and are handled by Volkswagen Group of America, Porsche has a separate system and staff. According to Goel, long-term integration would require standardising systems, combining the workforce and thus allowing shared slotting of inventory in the warehouse.

While inventory storage and management is separate, the brands will benefit from shared building maintenance and services, as well as sharing transport to dealers where possible.

“About 20% of the Porsche dealers have the exact same address as the Audi dealers, so their parts will ride on the same trucks,” said Goel.

For Volkswagen Group of America, meanwhile, the Sacramento PDC was set up to meet next day delivery targets on aftermarket parts in the Washington and Oregon regions, which had been impossible from the Los Angeles PDC. The Sacramento facility is now supporting more than 90 dealers in six different states with service parts, with all except around a dozen now able to receive stock orders by next-day delivery.

“The intent is that, if you are a vehicle owner and you come in to the dealership, 85% of the time or more the dealer will have the parts to fix your car the same day,” said Goel. “If they don't, they order it overnight and get it by 8am the next day and you'll be out by noon.”