Port Canaveral on a roll 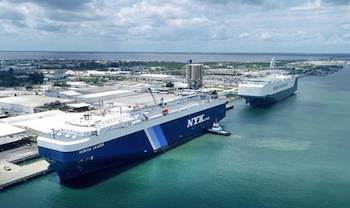 Port Canaveral is now able to handle more finished vehicles thanks to a draft deepening project that allows post-Panamax ro-ro vessels to berth at the port. Late last month, the Floridian port accommodated vessels from Höegh Autoliners and NYK Line simultaneously, a first for the facility, which only started handling vehicle flows in 2016.

The vessels discharged and loaded vehicles from the port’s 6.5-hectare vehicle handling facility, which is managed by vehicle processor Autoport. Stevedoring services at the port are provided by SSA Marine and Ceres.

While the numbers handled on the recent calls were small – Hoegh discharged 239 vehicles while NYK loaded 43 – it marks a significant new line of trade for the port.

The Höegh Trotter is a post-Panamax vessel capable of carrying 8,500 vehicle units and the NYK Auriga Leader can carry 6,200 units. NYK has included Canaveral on its trade lane to Central and South America, and the Caribbean.

“To have two ro-ro vessels importing and exporting vehicles simultaneously at the port is an important milestone for our cargo operations and demonstrates our growing ability to accommodate multiple large-capacity vessels,” said Captain John Murray, CEO of Port Canaveral. “Central Florida’s continued economic growth is spurring increased ro-ro business for our port.”

Last year, Port Canaveral carried out a six-month dredging project to deepen the port’s West Turning Basin. The project provided deeper draft vessel access equal to the channel depth of 44 feet (13.4 metres). A spokesperson for the company said that the channel to the port boasted one of the deepest draft and working cargo berths and also has no air draft limitation meaning there are no overhead obstructions (air draft is the distance from the surface of the water to the highest point on the vessel).

Port Canaveral is handling vehicle imports from locations, including India and Mexico, and exports to Colombia, Costa Rica, the Dominican Republic, Guatemala, Honduras, Mexico and Panama. Last year it discharged 14,800 vehicles and is projecting 25,000 vehicles for this financial year. As well as Höegh Autoliners and NYK, MOL is also calling at the port.

Hinterland links from Canaveral are currently by truck with some import deliveries going as far as Tennessee. Canaveral Port Authority has been awarded an $8.2m grant from the Florida Job Growth Grant Fund for a $12m Port Canaveral roadway improvement project to support the port's growth in business. According to the company the plans include increasing roadway capacity for the port's north side cargo roads, new intersection signals for public safety and cargo traffic control, and revisions to the existing north side cruise roadway network to relieve congestion and improve operations. The project also includes new port-wide wayfinding signage to improve safety and adaptability for all population in the area.

Developments at the North American vehicle handling ports will be under discussion at the Finished Vehicle Logistics Import Export conference, which takes place between August 7-8. Please also see our most recent annual North American ports survey for the facts and figures on the finished vehicle import and export trade in the region through 2017.