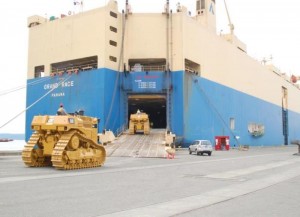 Work is now underway at the port of Everett in the US state of Washington to strengthen the South Terminal with the aim of better supporting heavy ro-ro cargo operations.

The total budget for the infrastructure project is $3.8m, which includes strengthening 140-feet (43 metres) of the 700-foot (214 metre) dock to create a heavy lift pad. The work involves driving 42 new steel piles under the dock.

The port has received a grant from the Washington State Department of Commerce amounting to $1.45m to help fund the project, which is expected to be complete by May this year.

The port said that the upgrading work was vital to ensure it can support machinery, heavy equipment and other break bulk cargoes that are regularly imported and exported through the terminal.

“We are located on the BNSF mainline to the Midwest and focus on over-dimensional break bulk cargoes, such as aerospace, energy, forest products, and manufacturing,” said a spokesperson for the port. “We have been making significant rail and infrastructure investments to grow our rolling stock, and current handle tractors, combines and other equipment.”