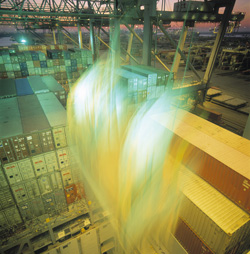 The port of Rotterdam, Europe’s largest port, has announced that its volume in the first half of the year is largely unchanged from last year. Container traffic dropped slightly, with ro-ro traffic up by 2%.

well as price revisions. Seaport dues decreased by 2%, reflecting the port’s overall decline in throughput. Operating expenses, on a half-yearly basis, are slightly higher than during last year.

While ro-ro traffic increased by 2% to more than 9m tonnes, the report stated that this volume is highly dependent on the growth of the British economy, which it said is not yet showing any signs of a strong recovery. As pointed out in an analyst note by Transport Intelligence senior analyst, Thomas Cullen, this complaint is somewhat in contrast to strong automotive growth in production and sales in the UK. However, it is likely a reflection of slow trailer traffic by ro-ro to the UK.